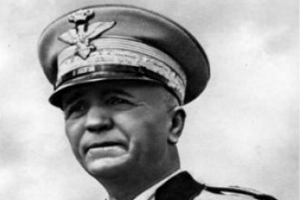 Pietro Badoglio, 1st Duke of Addis Abeba, 1st Marquess of Sabotino (28 September 1871 – 1 November 1956) was an Italian general during both World Wars and a Prime Minister of Italy, as well as the first viceroy of Italian East Africa.

After studying at the military academy in Turin, he served with the Italian Army from 1892, at first as a Lieutenant (Tenente) in artillery, taking part in the early Italian colonial wars in Eritrea (1896), and in Libya (1912).

At the beginning of Italian participation in World War I, he was a Lieutenant Colonel (Tenente Colonnello); he rose to the rank of General following his handling of the capture of Monte Sabotino in May 1916 and by the late months of 1917 (mostly thanks to his Masonic contacts, including his superior, General Capello) was named as Vice Chief-of-Staff (Sottocapo di Stato Maggiore) despite being one of the main leaders responsible for the disaster during the Battle of Caporetto on 24 October 1917. With regard to the Battle of Caporetto, although he was blamed in various quarters for his disposition of the forces under his command before the battle, a commission of inquiry rejected most of the criticisms made upon him.

In the years after World War I, in which he held several high ranks in the Italian Army, Badoglio exerted a constant effort in modifying official documents in order to hide his role in the defeat.

Post-war, Badoglio was named as a Senator, but also remained in the army with special assignments to Romania and the U.S. in 1920 and 1921. At first, he opposed Benito Mussolini and after 1922 was side-lined as ambassador to Brazil. A change of political heart soon returned him to Italy and a senior role in the army as Chief of Staff from 4 May 1924. On 25 June 1926, Badoglio was promoted to the rank of Marshal of Italy (Maresciallo d'Italia).

Badoglio was the first unique governor of Tripolitania and Cyrenaica (Italian Libya) from 1929 to 1933. During his goveronship, he played a vital part (with Rodolfo Graziani, deputy governor of Cyrenaica) in defeating the Libyan rebels. On 24 January 1932, Badoglio proclaimed the end of Libyan resistance for the first time since the Italian invasion in 1911.

On 3 October 1935, because the progress of De Bono's invasion of Abyssinia was judged to be too slow by Mussolini, Badoglio, who had in the meantime launched an epistolary campaign against Emilio de Bono, replaced de Bono as the commander. Badoglio asked for and was given permission to use chemical warfare in response to torture and murder of downed Italian pilot Tito Minniti during the Ethiopian "Christmas Offensive".

He employed mustard gas to effectively destroy the Ethiopian armies confronting him on the northern front. Badoglio commanded the Italian invasion army at the First Battle of Tembien, the Battle of Amba Aradam, the Second Battle of Tembien, and the Battle of Shire. On 31 March, Badoglio defeated Emperor Haile Selassie commanding the last Ethiopian army on the northern front at the Battle of Maychew. On 26 April, with no Ethiopian resistance left between his forces and Addis Ababa, Badoglio launched his "March of the Iron Will" to take the Ethiopian capital city and end the war. By 2 May, Haile Selassie had fled the country.

On 5 May 1936, Marshal Badoglio led the victorious Italian troops into Addis Ababa. Mussolini declared King Victor Emmanuel to be the Emperor of Ethiopia, and Ethiopia became part of the Italian Empire. On this occasion, Badoglio was appointed the first Viceroy and Governor General of Ethiopia and ennobled with the victory title of Duke of Addis Abeba.

On 11 June 1936, Rodolfo Graziani replaced Badoglio as Viceroy and Governor General of Ethiopia. Badoglio returned to his duties as the Supreme Chief of the Italian General Staff. According to Time magazine, Badoglio even joined the Fascist Party in early June.

Badoglio was not in favour of the Italian-German Pact of Steel and was pessimistic about the chances of Italian success in any European war but he did not oppose the decision of Mussolini and the King to declare war on France and Great Britain. Following the Italian army's poor performance in the invasion of Greece in December 1940, he resigned from the General Staff. Badoglio was replaced by Ugo Cavallero.

On 24 July 1943, as Italy had suffered several setbacks following the Allied invasion of Sicily in World War II, Mussolini summoned the Fascist Grand Council, which voted no confidence in Mussolini. The following day Il Duce was removed from government by King Victor Emmanuel III and arrested. On 3 September 1943, General Giuseppe Castellano signed the Italian armistice with the Allies in Cassibile on behalf of Badoglio, who was named Prime Minister of Italy. On 8 September, the armistice document was published by the Allies in the Badoglio Proclamation before Badoglio could communicate news of the switch to the Italian armed forces. The units of the Italian Royal Army, Royal Navy, and Royal Air Force were generally surprised by the switch and unprepared for German actions to disarm them. In the early hours of 9 September, Badoglio, King Victor Emmanuel, some military ministers, and the Chief of the General Staff escaped to Pescara and Brindisi seeking Allied protection. On 23 September, the longer version of the armistice was signed in Malta. On 13 October, Badoglio and the Kingdom of Italy officially declared war on Nazi Germany. Badoglio continued to head the government for another nine months. Following the German rescue of Mussolini, the liberation of Rome, and increasingly strong opposition, he was on 9 June 1944 replaced by Ivanoe Bonomi of the Labour Democratic Party.

Due to increased tensions with the Soviet Union, in which the British government saw Pietro Badoglio as a guarantor of an anti-communist post-war Italy, he was never tried for Italian war crimes committed in Africa.