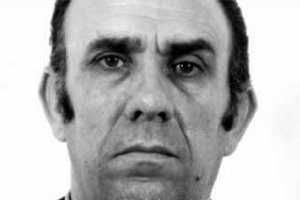 Gaetano Badalamenti (September 14, 1923 – April 29, 2004) was a powerful member of the Sicilian Mafia. Don Tano Badalamenti was the capofamiglia of his hometown Cinisi, Sicily, and headed the Sicilian Mafia Commission in the 1970s. In 1987 he was sentenced in the United States to 45 years in federal prison for being one of the leaders of the so-called Pizza Connection, a USD 1.65 billion drug-trafficking ring that used pizzerias as fronts to distribute heroin from 1975 to 1984.

Tano Badalamenti always remained an old-style mafioso, faithful to the rule of omertà. He never admitted to belong to Cosa Nostra, but he never denied it either. At one point he said during interrogations by the FBI: "If I did answer I would damage myself in Italy." Despite his 45-year sentence in the US he never became a pentito. Badalamenti commanded respect. He is described as "the kind of person who, when you look at him, you know is in charge of something."

Tano Badalamenti was the youngest of a family with five boys and four girls. His family owned a dairy farm in Cinisi. He had minimal schooling, attending school for only four years, before he was put to work as a field hand at age ten. Drafted into the Italian army in 1941, he deserted before the Allies invaded Sicily in July 1943. His elder brother Emanuele Badalamenti migrated to the United States and operated a supermarket and gas station in Monroe, Michigan. In 1946 Gaetano was named in an arrest warrant on charges of conspiracy and kidnapping. In 1947 he was charged with murder as well, and he fled to his brother Emanuele in the US. Badalamenti was arrested in 1950 and deported back to Italy. He married Theresa Vitale (her sister was married to Filippo Rimi, the capomafia of Alcamo) and set up a business on the family land as a lemon grower. His judicial difficulties were all resolved because of insufficient evidence.

Badalamenti founded a successful construction business that supplied the crushed rock for Palermo's Punta Raisi Airport which fell within the Cinisi family's sphere of influence. In the early 1960s he successfully bribed officials to have the airport built near his hometown, despite its inconvenient geographical position. The construction needed large quantities of rock and gravel, which were available in large quantities on the family property. His two construction firms, a concrete plant and a fleet of trucks provided much needed employment for the townsfolk and enriched Badalamenti.

Badalamenti assumed leadership of the Mafia in Cinisi in 1963 after a car bomb killed Cesare Manzella during the First Mafia War. The Ciaculli Massacre on June 30, 1963 – when seven police and military officers sent to defuse a car bomb intended for mafioso Salvatore Greco were killed – changed the Mafia War into a war against the Mafia. It prompted the first concerted anti-mafia efforts by the state in post-war Italy. Within a period of ten weeks 1,200 mafiosi were arrested, many of whom would be kept out of circulation for five or six years. The Sicilian Mafia Commission was dissolved.

Badalamenti had complete control in Cinisi. "It seemed that Badalamenti was well liked by the Carabinieri as he was calm, reliable, and always liked a chat. It almost felt like he was doing them a favour in that nothing ever happened in Cinisi, it was a quiet little town."  "I often used to see them walking arm in arm with Tano Badalamenti and his henchmen. You can't have faith in the institutions when you see the police arm in arm with mafiosi," according to Giovanni Impastato – the brother of murdered anti-mafia activist Giuseppe Impastato – in his declaration before the Italian Antimafia Commission.

Gaetano Badalamenti would become one of the major heroin traffickers of the Sicilian Mafia. From 1975 to 1984, he was one of the main ringleaders of a US$1.65 billion heroin trafficking operation, known as the Pizza Connection, that imported heroin from the Middle East and distributed the drugs through U.S. mid-western pizzeria store fronts.

Already in 1951, the American police identified a 50 kilogram shipment of heroin to Badalamenti who was then living in Detroit as an illegal immigrant. However, in the 1950s most money was made by smuggling foreign cigarettes into Italy. In 1953 Badalamenti was arrested for cigarette smuggling in Italy for the first time. In 1957 he was caught again with 3,000 kilograms of foreign-made cigarettes.

The repression caused by the Ciaculli Massacre disrupted the Sicilian heroin trade to the United States. Mafiosi were banned, arrested and incarcerated. Control of the trade fell into the hands of a few fugitives: the cousins Salvatore "Ciaschiteddu" Greco and Salvatore Greco, also known as "l'ingegnere" or "Totò il lungo", Pietro Davì, Tommaso Buscetta and Gaetano Badalamenti.

After 1975, Badalamenti joined forces with Salvatore Catalano of the Sicilian faction in the Bonanno family in New York and was involved with the "Pizza Connection" case, where the mafia smuggled millions worth of heroin and cocaine to USA using mafia-owned pizzerias as distribution points. When the FBI began to close in 1984, Badalamenti fled to Spain but was arrested in Madrid.

In 1985 Badalamenti and others involved with the case were charged with illegal narcotics trade, conspiracy against the RICO Act and for money laundering. Prosecutors also said that they were responsible for murders in USA and Sicily. The trial of Badalamenti and his allies took 17 months. During it Badalamentis and Catalanos testified against each other. On June 22, 1987 Badalamenti was convicted only of money laundering but sentenced to 45 years in prison and fines of $125,000. Only his son Vito Badalamenti was released.

On the Sicilian Mafia Commission

In 1970, the Sicilian Mafia Commission was revived. It consisted of ten members but was initially ruled by a triumvirate consisting of Gaetano Badalamenti, Stefano Bontade and the Corleonesi boss Luciano Leggio, although it was Salvatore Riina who would actually represent the Corleonesi. One of the first issue that had to be confronted was an offer of prince Junio Valerio Borghese who asked for support for his plans for a neofascist coup in return for a pardon of convicted mobsters like Vincenzo Rimi and Luciano Leggio. Giuseppe Calderone and Di Cristina went to visit Borghese in Rome. Badalamenti opposed the plan. However, the Golpe Borghese fizzled out in the night of December 8, 1970.

In 1974 the full Commission was reconstituted under the leadership of Badalamenti. The Commission was meant to settle disputes and keep the peace, but Leggio and his stand-in and successor, Salvatore Riina, were plotting to decimate the Palermo clans. In January 1978, the old and ailing former head of the Commission Salvatore Greco "Ciaschiteddu" came all the way from Venezuela to try to refrain Badalamenti, Giuseppe Di Cristina and Salvatore Inzerillo from retaliating against the growing power of the Corleonesi. Di Cristina and Badalamenti wanted to kill Francesco Madonia, the boss of Vallelunga Mafia family and an ally of the Corleonesi in the province of Caltanissetta. Greco tried to convince them not to go ahead and offered Di Cristina to emigrate to Venezuela. Nevertheless, Badalamenti and Di Cristina decided to go on and on April 8, 1978, Francesco Madonia was murdered.

In retaliaton, Di Cristina was killed in May 1978 by the Corleonesi. Next was Giuseppe Calderone, who was killed on September 8, 1978. At the close of 1978, Gaetano Badalamenti was expelled from the Commission and Michele Greco replaced him. This marked the end of a period of relative peace and signified a major change in the Mafia itself. Tano Badalamenti was also replaced as head of the Cinisi Mafia family by his cousin Antonio Badalamenti. He moved to Brazil through Spain and settled in São Paulo.

Italy’s highest court, the Court of Cassation, ruled in October 2004 that former Prime Minister Giulio Andreotti had "friendly and even direct ties" with top men in the so-called moderate wing of Cosa Nostra, Gaetano Badalamenti and Stefano Bontade, favoured by the connection between them and Salvo Lima through the Salvo cousins.

According to investigating magistrates Andreotti also commissioned the Mafia to kill the journalist Mino Pecorelli, managing editor of a magazine Osservatorio Politico (OP). The murder took place on March 20, 1979. Andreotti feared Pecorelli was about to publish information that could have destroyed his political career, in particular the illegal financing of the Christian Democratic Party and secrets about the 1978 kidnapping and killing of former Prime Minister Aldo Moro by the Red Brigades.

Mafia turncoat Tommaso Buscetta testified that Gaetano Badalamenti told him it was the Salvo cousins who commissioned the murder with the Mafia as a favour to Andreotti. In 1999 the Perugia Court acquitted Andreotti, his righthand man Claudio Vitalone (a former Foreign Trade Minister), Badalamenti and Giuseppe Calò, as well as the alleged killers Massimo Carminati, one of the founder of the far-right Nuclei Armati Rivoluzionari (NAR) group, and Michelangelo La Barbera. On November 17, 2002, the Appeals Court overturned the acquittal of Badalamenti and Andreotti. They were sentenced to 24 years in prison for ordering the murder of Pecorelli. However, the Supreme Court cleared both on October 30, 2003.

In April 2002, an Italian court convicted him of the 1978 murder of activist radio broadcaster Giuseppe Impastato and sentenced him to life imprisonment. Impastato used humor and satire as his weapon against the Mafia. In his popular daily radio programme Onda pazza (Crazy Waves) he mocked politicians and mafiosi alike. On a daily basis he exposed the crimes and dealings of mafiosi in Mafiopoli (Cinisi) and the activities of Tano Seduto (Sitting Tano), a thinly disguised pseudonym of Don Tano Badalamenti, the capomafia of Cinisi.

Don Tano Badalamenti died from heart failure at the age of 80 at the Devens Federal Medical Center, Ayer, Massachusetts, on April 29, 2004. Ralph Blumenthal, a New York Times reporter, depicted Badalamenti as "a manipulator who would do anything to regain leadership of the Sicilian mob" in his 1988 book, Last Days of the Sicilians. Shana Alexander, portrayed him as "a man of unusual dignity" in her book The Pizza Connection, published the same year.