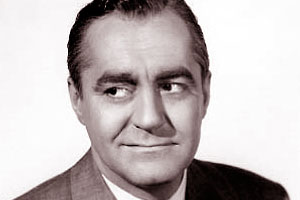 American actor in vaudeville and radio who was onscreen from 1942 in films such as "Bright Victory," "Pat and Mike" and "Crazy Mama." He is primarily known as the voice of the myopic curmudgeon Mr. Magoo in cartoons. On TV, he played in the series' "I Married Joan," 1952-55 and the very popular series "Gilligan's Island," 1964-67.

The son of a successful business executive, he had an affluent upbringing. As an aspiring actor, he made a film debut in "The Great Lover," 1949. He actually began to be known for his voice during his radio days, active in radio plays during the '30s and '40s plus making 13,000 radio commercials. After he signed a contract with RKO, he had a small role in the 1952 film, "Androcles and the Lion," along with his boyhood chum, Victor Mature. One day he and Mature left the set, still in Roman costume, to make a deadline for Mature to sign some papers. They then stopped at a Hollywood bar to have a drink. The bartender stopped dead at seeing their costumes, and Mature thundered in his resonant voice, "What's the matter, don't you serve Servicemen here?"

Backus had a greater range than light comedy, playing James Dean's father in "Rebel Without a Cause," 1955. He once described his film career as a series of "buddy roles" in which he drives the hero to the church but never wins the girl himself. He made about 80 pictures in his 50-year acting career, with comedy always his forte and meal-ticket.

He met his artist-actress wife in 1941 when she brought chicken soup to a sick neighbor. He was visiting that day, and he and Henny, (Henriette Kay,) were never apart from that day on. They didn't have kids.