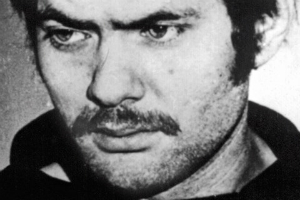 Andreas Bernd Baader (6 May 1943 – 18 October 1977) was one of the first leaders of the German left-wing militant organization Red Army Faction, also commonly known as the Baader-Meinhof Gang.

Andreas Baader was born in Munich on 6 May 1943. He was the only child of historian and archivist Dr. Berndt Phillipp Baader. Berndt Baader served in the German Wehrmacht, was captured on the Russian Front in 1945, and never returned. Andreas was raised by his doting mother, aunt, and grandmother.

Baader was a high school dropout and criminal before his Red Army Faction (RAF) involvement. He was one of the few members of the RAF movement who did not attend a university.

In 1968 Baader and his girlfriend Gudrun Ensslin were convicted of the arson bombing of a department store in Frankfurt am Main to protest the public's "indifference" to the genocide in Vietnam. DM675,000 in damage was caused; no-one was injured or killed.

After being sentenced, Baader and Ensslin fled in November 1969. They were smuggled out of West Germany by sympathizers and made the tour of the left-wing communities of France, Switzerland, and Italy before re-entering West Germany covertly.

Baader was later caught at a traffic stop for speeding on 4 April 1970. He produced a fake driver's license in the name of famous writer Peter Chotjewitz, but was placed under arrest when he failed to answer personal questions like the names and ages of Chotjewitz's children.

Ensslin masterminded an escape plan. Journalist Ulrike Meinhof and Baader's lawyers concocted a false "book deal" in which Meinhof would interview Baader. A few weeks later, in May 1970, he was allowed to meet her at the library of the Berlin Zentralinstitut outside the prison, without handcuffs but escorted by two armed guards. Meinhof was allowed to join him. Confederates Irene Goergens and Ingrid Schubert entered the library carrying suitcases, then opened a door to admit a masked gunman armed with a pistol and then drew pistols out of suitcases. They then fired shots that wounded a 64-year-old librarian, hitting him in his liver. Baader, the masked gunman, and the three women then fled through a window.

The group became known as the Baader-Meinhof Gang. Baader and others then spent some time in a Fatah military training camp in Jordan before being expelled due to "differences in attitudes". Back in Germany, Baader robbed banks and bombed buildings from 1970 to 1972. Although he never obtained a driving licence, Baader was obsessed with driving. He regularly stole expensive sports cars for use by the gang, and was arrested driving an Iso Rivolta IR300.

On 1 June 1972, Baader and fellow RAF members Jan-Carl Raspe and Holger Meins were apprehended after a lengthy shootout in Frankfurt.

From 1975 to 1977, a long and expensive trial took place in a fortified building on the grounds of Stuttgart's Stammheim prison. According to reports from his jailers (including Horst Bubeck), the defendants, especially Baader, kept their cells as dirty and disgusting as possible in order to discourage searches for items that might be smuggled in; at this time lawyers and defendants were not separated by panes of glass during unsupervised meetings, as evidenced by photos taken by inmates. However, as a precaution against items being smuggled in, all prisoners were strip-searched and inspected and given new clothes before and after meeting lawyers.

During a collective hunger strike in 1974, which led to the death of Meins, philosopher Jean-Paul Sartre visited Baader in Stammheim Prison where he was being held. He allegedly described Baader after the meeting as being an "idiot" ("Quel con !"). Although he did not like Baader's behavior, he criticized the harsh conditions of imprisonment Baader endured.

Meinhof was found dead in her cell at Stuttgart-Stammheim on 9 May 1976, hanging from the grating covering her cell window. Members of the Red Army Faction and others claimed that she was killed by the German authorities. The second generation of the RAF committed several kidnappings and killings in a campaign in support of their comrades.

The three remaining defendants were convicted in April 1977 of several murders, attempted murders, and of forming a terrorist organization, and were sentenced to life imprisonment.

Militants tried to force the release of Baader and ten other imprisoned RAF members by kidnapping Hanns Martin Schleyer on 5 September 1977, as part of the sequence of events known as the "German Autumn", which began on 30 July 1977 with the murder of the banker Jürgen Ponto.

However, on 6 September 1977 an official statement was released in which the state declared that the prisoners would not be released under any circumstances, and on the same day a Kontaktsperre ("communication ban") was enacted against all RAF prisoners. This order deprived prisoners of all contact with each other as well as with the outside; all visits, including those of lawyers and family members, were forbidden. In addition, the prisoners were deprived of their access to post, newspapers, magazines, television, and radio. The official justification for this was a claim by the state that the prisoners had supervised Schleyer's kidnapping from their cells with the assistance of their lawyers. It was claimed that a hand-drawn map had been found which had been used in the kidnapping in Newerla’s car on 5 September. On 10 September the prisoners' lawyers lost their appeal against the Kontaktsperre order and on 2 October it became effective.

On 13 October 1977 four members of the Popular Front for the Liberation of Palestine hijacked Lufthansa Flight 181 on a flight from Palma de Mallorca to Frankfurt, their leader demanding the release of the eleven RAF prisoners detained at Stammheim. The aircraft was eventually flown to Mogadishu, Somalia, where it arrived in the early hours of 17 October. The passengers of the Boeing 737 were freed in an assault carried out by German GSG 9 special forces in the early hours of 18 October 1977 which saw the death of three of the militants.

According to official accounts of his death, Raspe learned of GSG 9's success on a smuggled transistor radio, and spent the next few hours talking to Baader, Ensslin, and Möller, who agreed to a suicide pact. In the morning, Andreas Baader and Jan-Carl Raspe were found dead in their cells, having died from gunshot wounds, while Gudrun Ensslin was found hanging from a noose made from speaker wire. RAF member Irmgard Möller was found with four stab wounds to her chest, but survived.

All official inquiries on the matter concluded that Baader and his two accomplices committed collective suicide, and Baader-Meinhof biographer Stefan Aust argued in the original edition of his book, The Baader-Meinhof Group (1985), that they almost assuredly did kill themselves.

There are many debatable aspects to the deaths: Baader was supposed to have shot himself in the base of the neck so that the bullet exited through his forehead; repeated tests indicated that it was virtually impossible for a person to hold and fire a gun in such a way. In addition, three bullet holes were found in his cell: one lodged in the wall, one in the mattress, and the fatal bullet itself lodged in the floor, suggesting that Baader had fired twice before killing himself. Finally, Baader had powder burns on his right hand, but he was left-handed. Raspe, however, showed no signs of powder burns.

The theory itself that guns had somehow been smuggled into Stammheim prison depended on the testimony of Hans Joachim Dellwo (brother of prisoner Karl-Heinz Dellwo) and Volker Speitel (husband of Angelika Speitel). Both had been arrested on 2 October 1977, and charged with belonging to a criminal association; under pressure from the police they subsequently admitted to acting as couriers and testified that they were aware of lawyers smuggling items to the prisoners during the trial. Their testimony was, however, tainted because they provided it in order to avoid lengthy prison sentences and received reduced sentences and new identities. In 1979 two defence attorneys were tried and convicted for smuggling weapons. However, as noted above, the lawyers had been unable to meet with their clients after 6 September 1977 due to the Kontaktsperre order.

In the revised version of his comprehensive book on the RAF, which incorporates much new evidence and was published in English in 2009, Stefan Aust is categorical that the group members committed suicide.

Removal and loss of brain

Following their apparent suicides, the German government had the brains of Andreas Baader, Ulrike Meinhof, Gudrun Ensslin, and Jan-Carl Raspe removed for study at the Neurological Research Institute at the University of Tübingen. The results of Meinhof's brain study showed damage from an operation for a brain tumor in 1962. The results of the study of the others' brains are not known.

Aside from the removal of his brain, a death mask was made of Baader. The brains of all but Meinhof have apparently been lost and cannot be accounted for by German authorities.

Stammheim - Die Baader-Meinhof-Gruppe vor Gericht ("Stammheim - The Baader-Meinhof Gang on Trial") (1986) a film directed by Reinhard Hauff; with Ulrich Tukur in the role of Andreas Baader; after the book by Stefan Aust. It won the Golden Bear at the 1986 Berlin Film Festival.

A Fish Called Wanda (1988) - the manic narcissist assassin Otto (played by Kevin Kline) was a parody roughly based on Andreas Baader.

Todesspiel ("Death Play") (1997) is a TV docudrama by Heinrich Breloer; with Sebastian Koch as Andreas Baader. It is about the kidnapping and later cold-blooded murder of Bundesvereinigung der Deutschen Arbeitgeberverbändeunion (BDA) president Hanns Martin Schleyer.

In 2002, director Christopher Roth released the film Baader, with Frank Giering in the title role. It covers the period between 1967 and 1972.

In the 2008 movie Der Baader Meinhof Komplex it was decided that the actor Moritz Bleibtreu who played Baader should not lisp as Baader did.