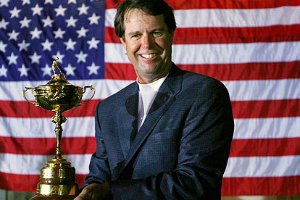 Paul William Azinger (born January 6, 1960) is an American professional golfer and occasional on air golf analyst. He spent almost 300 weeks in the top-10 of the Official World Golf Ranking between 1988 and 1994.

Azinger was born in Holyoke, Massachusetts. He started in golf at age five. He moved to Sarasota, Florida where he attended and graduated from Sarasota High School. After graduating from Brevard Community College, he attended Florida State University and turned professional in 1981.

Azinger won eleven tournaments on the PGA Tour in seven seasons from 1987 to 1993, climaxing in his one major title, the 1993 PGA Championship at Inverness, which he won in a sudden-death playoff against Greg Norman.

Azinger finished one shot behind Nick Faldo at the 1987 Open Championship at Muirfield after making bogey at both the 71st and 72nd holes. Azinger was bidding to become only the fourth golfer since 1945 to win the British Open at the first attempt and said that he was "heartbroken" to leave Muirfield without the Claret Jug trophy.

In December 1993, Azinger was diagnosed with non-Hodgkin lymphoma in his right shoulder. His treatment included six months of chemotherapy and five weeks of radiation in California. He wrote a book called Zinger about his battle with the disease and was the recipient of GWAA Ben Hogan Award in 1995, given to the individual who has continued to be active in golf despite physical handicap or serious illness. In 2000, he won his first tournament in seven seasons at the Sony Open in Hawaii.

Azinger was the U.S. Ryder Cup captain for the 2008 at Valhalla Golf Club in Louisville, Kentucky. He led the team to its first victory over the European squad since 1999. The team's victory was largely credited to his innovative strategy. This strategy is outlined in his book, Cracking the Code: The Winning Ryder Cup Strategy: Make it Work for You, which was released in May 2010. The book was co-authored with Ron Braund, a corporate team builder and psychologist, who consulted Azinger throughout the Ryder Cup.

He made his Champions Tour debut at The ACE Group Classic in February 2010.

Since 2005, Azinger has worked as a color commentator for ESPN and ABC Sports' golf coverage. He initially shared color commentating duties with his former Ryder Cup and British Open rival Nick Faldo. Azinger and Faldo, along with host Mike Tirico formed one of the most highly touted broadcast teams in televised golf history. Faldo left for rival CBS after the 2006 season. Since then, Azinger has worked alone with Tirico. However, when Faldo and Azinger were opposing captains at the 2008 Ryder Cup, Andy North subbed. Faldo and Azinger have also had two reunion telecasts, first at the 2007 Open Championship and then at the 2009 Presidents Cup.

Azinger threw out the ceremonial first pitch at the Tampa Bay Rays' second ever playoff game on October 3, 2008. He recently launched a new application for the iPad, iPhone, and iPod Touch called Golfplan.

Azinger is a Christian. He and his wife Toni met at FSU and have been married since 1982. They currently live in Bradenton, Florida and have two daughters, Sarah Jean Collins and Josie Lynn.

Azinger gave the eulogy at the memorial service for his friend Payne Stewart, who was killed in a plane crash in 1999. His two managers and close friends, Robert Fraley and Van Arden, also died in the plane crash.