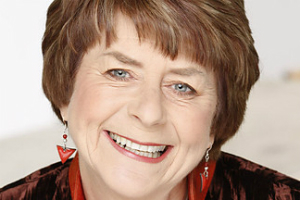 British poet and comedienne, a raconteur and poet who made a debut on radio in Autumn 1974. A loner at school, she worked continually to get her work before the public, once distributing her own pamphlet of verse and selling 7,000 copies.

By 1975 she was working in an office and writing at night when she got her start in TV by winning a talent show, "Opportunity Knocks." On 2/13/1976, she quit her day job to concentrate on her writing, continually polishing her work for the next 20 years.

She achieved moderate success, being a household name for a few years until she was branded with scandal as an adulteress and home wrecker, having her show scrapped in 1978.

She later married the man who caused her fame as an adulteress, Dudley Russell in July 1982 and had the first of their two kids that December.

She made a come-back as a one-woman show in 1994 with a six-month sell-out tour, "The Works." Her devoted following love every doggerel verse, yokel accent and reassuring everyday colloquial story that she carries in her bag of tricks.