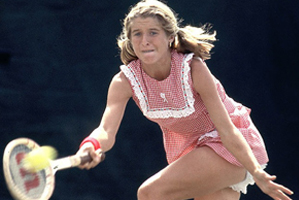 American National Jr. tennis champ 1977-1978, the youngest U.S. champion in 1979 and the youngest to crack the million dollar prize barrier. She played from age two, with a family that was quietly supportive and emphasized the fun of the game. Her dad was a nuclear physicist; four older siblings.

Tournaments began when she was 13 and at 16 she was the youngest woman to unseat the reigning queen, Chris Evert Lloyd.

Austin had recurring back and neck injuries from February 1984. On 8/03/1989, she had a car crash when her car was hit by a van that went through a red light. Her heart and spleen were bruised, and her right knee, shattered. Told that she would never play tennis again, she took a long hiatus before making a comeback tournament 2/22/1993. She quit tennis for good on 7/20/1994, at 22, becoming an analyst for ABC-TV during its broadcasts of the first Lipton International Players Championships.

She made over $2 million in product endorsements. With sportswriter Christine Brennan, she wrote her autobiography "Beyond Center Court," (William Morrow, 1992)