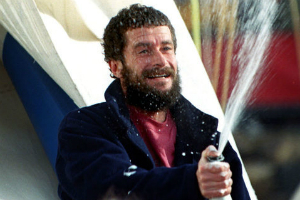 French sailor, the winner of the boat challenge in Sydney. On the morning of 2/17/1997 at 9.33 AM local time (08:33 GMT), Auguin crossed the finish line of the Vendée Globe single-handed non-stop race around the world. In doing so, he set a new course record of 105 days, 20 hours, 31 minutes and 23 seconds, more than three and a half days better than the previous record set by Titouan Lamazou in the inaugural contest in 1989-'90. Auguin now has to be considered one of the greatest single-handed sailors of all time -- if not the greatest.

Auguin was the son of a physical education teacher and a mother who was a primary school teacher. He went for his first sail when he was five-years-old on his father's 25-foot Muscadet. At age 15, he discovered offshore racing and competed in the Fastnet Race, Cowes-Dinard Race, Cherbourg-Solent Race, Channel Race and others with assiduity for ten years. During this time, Auguin was also studying mechanical engineering, and upon receiving his degree became a teacher, which allowed him plenty of time to advance his sailing skills.

His first calling was always the sea. His record speaks for itself. He has entered three single-handed round-the-world races -- BOC Challenge (twice) and the Vendée -- and won all of them. He is the only skipper ever to achieve such a feat.

In 1986, after winning the Figaro Solo Race, Auguin decided to become a professional sailor. He competed in the Figaro twice more, and also sailed on the Formula 40 catamaran circuit with his friend Pascal Leys (who sadly was lost during the 1993 Mini Transit).

In 1991, Auguin won his first single-handed race around the world, the BOC Challenge. In 1993, Auguin asked Groupe Finot for a new design for the BOC and the Vendée Globe. The boat, Sceta Calberson -- now Geodis -- was built at the JMV Shipyard in Cherbourg. He sailed it to victory in the BOC in 1994-'95, and now the Vendée Globe. During the '94-'95 BOC, Auguin logged 350.9 miles during a 24-hour period in December 1994. Then, while delivering the boat from Charleston, S.C. (finish port of the BOC), in the summer of '95 with a crew of five, Sceta Calberson covered 447.5 miles, an incredible average of 18.64 knots, during one 24-hour period.