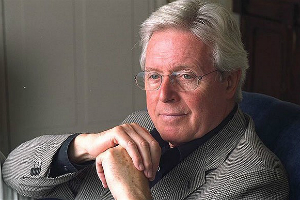 Michael Terence Aspel, OBE, (born 12 January 1933) is an English television presenter on programmes such as Crackerjack, Aspel and Company, This is Your Life, Strange but True? and Antiques Roadshow.

Aspel was born in Battersea in London. During the Second World War he was evacuated and spent nearly five years in Chard, Somerset. He attended Emanuel School after passing his eleven-plus in 1944 and served as a conscript of the National Service, in the ranks of the King's Royal Rifle Corps, from 1951 to 1953.

He worked as a drainpipe-layer and gardener, and sold advertising space for the Western Mail newspaper in Cardiff. He worked as a teaboy at William Collins publishers in London and then entered National Service. He took up a job at the David Morgan department store in Cardiff, before working as newsreader for the BBC in Cardiff in 1957. He also acted in Cardiff, in a BBC Children's Hour serial "Counterspy", produced by BBC Wales and written by and starring John Darran. Aspel played "Rocky" Mountain, a Canadian. By the early sixties, he had become one of four regular newsreaders on BBC national television, along with Richard Baker, Robert Dougall and Corbet Woodall.

At the BBC he began presenting a number of other programmes such as the series Come Dancing, Crackerjack, Ask Aspel, and the Miss World beauty contest, which he covered 14 times. He narrated the BREMA cartoon documentary, The Colour Television Receiver (aka Degaussing), which was shown regularly on BBC2 between August 1967 and January 1971. He also provided narration for the BBC nuclear war documentary The War Game, which won the Best Documentary Feature Oscar in 1966, but was not shown on British television until 1985.

In 1969 and 1976 he hosted the BBC's A Song for Europe contest and provided the UK commentary twice at the Eurovision Song Contest in 1969 and 1976, also presenting the contest previews. He also had a regular joke slot on the Kenny Everett radio show on Capital Radio, and guest-starred twice on The Goodies, appearing as himself, notably in the episode "Kitten Kong", which won the Silver Rose at the Montreux Light Entertainment Festival.

From 1974 until the mid-1980s, Aspel also presented a three-hour weekday, mid-morning music and chat programme on Capital Radio in London,

In 1977 Aspel appeared with a number of other newsreaders and presenters in a song-and-dance routine ("There ain't Nothing Like a Dame") on The Morecambe and Wise Show. The sketch, in which the presenters were dressed as traditional sailors, is often cited as one of the classic moments of British TV comedy. In another episode, Morecambe refers to him as "Michael Aspirin". In the 1970s and 1980s he presented popular ITV programmes such as Give Us a Clue, Child's Play and The 6 O'Clock Show, a live current affairs and entertainment programme shown only in the London Weekend Television region.

During the early 1990s, Aspel presented two documentaries on BBC Radio 2 written by Terence Pettigrew, on subjects with which they shared a personal knowledge. Caught in the Draft was a nostalgic look back at compulsory national service. Both had served, at different times, in West Germany, Aspel in the Kings Royal Rifle Corps and Pettigrew in the REME. Also taking part in the programme were comedian/compere Bob Monkhouse, Leslie Thomas, author of The Virgin Soldiers, and BBC Radio 2 drivetime host John Dunn. This was followed by Nobody Cried When The Trains Pulled Out, a documentary about the evacuation of children from major British cities during World War 2 that included champion boxer Henry Cooper, actor Derek Nimmo and author Ben Wicks.

Aspel was the host of the chat show Aspel and Company, which ran in the 1980s and 1990s on ITV. The show was successful in attracting high-profile guests including then-Prime Minister Margaret Thatcher, George Harrison and Ringo Starr. In 1993, Aspel and Company was censured by the Independent Television Commission because of an interview with Arnold Schwarzenegger, Bruce Willis and Sylvester Stallone who were promoting their joint business venture Planet Hollywood. For a time, Aspel and Company performed well for ITV in the highly competitive Saturday night ratings but after the Planet Hollywood controversy, Aspel vowed never to host a chat show again.

Aspel was featured on This is Your Life in 1980, and when host Eamonn Andrews died in 1987 he became presenter of the programme until its run ended in 2003. In 1993, Aspel began presenting the ITV supernatural programme Strange But True?, a series exploring supernatural phenomena and unexplained mysteries. The programme ran between 1993 and 1997. He presented a new version of the ITV gameshow Blockbusters for the BBC in 1997; 60 programmes were made. In 1993, Aspel became an Officer of the Order of the British Empire (OBE) "for services to broadcasting", and has been voted TV Times and Variety Club Television Personality of the Year. He was also voted into the Royal Television Society Hall of Fame for outstanding services to television.

He presented BBC's Antiques Roadshow from 2000 until 2008, his last programme (recorded at Kentwell Hall, Suffolk) was shown on 30 March 2008 being a tribute to himself. In 2003, Aspel starred in a BBC Three spoof documentary which claimed he had affairs with Pamela Anderson, Valerie Singleton and Angie Best, among others. Aspel guest hosted the topical quiz show Have I Got News for You on two occasions (October 2005 and November 2007).

In 2006, he played the role of the narrator in the UK tour of Richard O'Brien's The Rocky Horror Show. During July and August 2008, Aspel filmed Evacuees Reunited, a five-part documentary series made by Leopard Films for ITV1, which aired from 15–19 December 2008. Along with fifteen other wartime evacuees, he returned to the locations of his own youth, including his wartime home in Chard, Somerset. He was reunited with his childhood gang of evacuees at Forde Abbey, just outside the town. Later he caught up with his 96 year-old former school teacher, Audrey Guppy.

Aspel has been married three times and has seven children. He married Dian Sessions in 1957 and they had two children and divorced in 1961. Aspel married Anne Reed, a TV scriptwriter, in 1962 and they had twin children and divorced in 1967. Aspel married actress Elizabeth Power, best known for her role in EastEnders but left her for Irene Clarke, a production assistant on This Is Your Life.

As a supporter of the charity Cancer Research UK he was made a Freeman of the Borough of Elmbridge, Surrey in April 2008.

A 2004 article in The Independent reported that Aspel had a dormant case of Non-Hodgkin lymphoma.