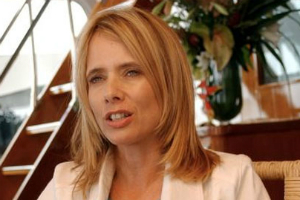 Arquette was born in New York City, the daughter of Brenda Olivia "Mardi" (née Nowak), an actress, poet, theater operator, activist, acting teacher, and therapist, and Lewis Arquette, an actor and director. Her paternal grandfather was comedian Cliff Arquette. Her mother was Jewish, the daughter of a Holocaust refugee from Poland. Her father was a convert to Islam from Catholicism, and was related to explorer Meriwether Lewis. Her siblings Patricia, Alexis, Richmond, and David Arquette are also actors.

In 1963, Arquette and her family moved to Chicago, where her father managed The Second City theater for several years. When she was eleven years old, her parents moved to a commune in Front Royal, Virginia. Arquette did not do well at school. In 1974, she hitchhiked across the country with three older teenagers, eventually going to San Francisco, where she worked at renaissance and Dickens fairs. Her professional theater debut was May 27, 1977, appearing in the Story Theatre Musical production of Ovid's The Metamorphoses at the Callboard Theatre on Melrose Place in Los Angeles.

The song "Rosanna" by Toto was not written about Rosanna Arquette by her then boyfriend and Toto band member Steve Porcaro. It was a joke band members used to make, regarding the coincidence.

Arquette has appeared in both television and screen films. In 1982, she earned an Emmy Award nomination for the TV film The Executioner's Song. Arquette's first starring role was in John Sayles's Baby It's You, a highly regarded but little seen film. She starred in Desperately Seeking Susan (1985) alongside pop singer Madonna, for which she won a British Academy Film Awards (BAFTA) for her "supporting" role despite her clearly being the lead. Madonna was breaking out at the time and many feel that while Rosanna's performance was key to the movie's success, Madonna made the movie into a mainstream hit. She had negotiated a deal where she would provide a song for the movie. "Into The Groove" became a huge hit for Madonna as did the movie itself. Following the commercial and critical success of Lawrence Kasdan's Silverado in 1985, and the failure of both After Hours and 8 Million Ways to Die, she quit Hollywood to work in Europe where she acted in Luc Besson's The Big Blue (1988).

In 1989, director Martin Scorsese offered her a part in New York Stories. Other movies of note are Pulp Fiction and the David Cronenberg film, Crash and the Australian film Wendy Cracked a Walnut (1990) (also known as …Almost). In 1990, Arquette appeared on the cover and in a nude pictorial in Playboy's September issue, although she claimed it was without her prior knowledge or consent.

In recent years, Arquette has expanded into directing, including the documentaries Searching for Debra Winger (2002) and All We Are Saying (2005); she also produced both projects.

Arquette appeared in the short running What About Brian as Nicole Varsi and on Showtime's The L Word as Cherie Jaffe. She also guest starred on Malcolm in the Middle as a healer named Anita that takes Malcolm's virginity.

In 2009, she joined Fit Parent Magazine, founded by Craig Knight, as Editor at Large. Arquette stars in the French thriller The Divide, directed by Xavier Gens.