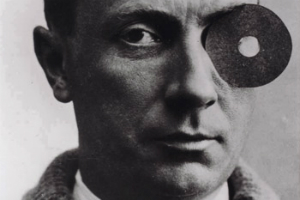 German-French poet, abstract painter and sculptor known as a great innovator and founder of the dada movement, a leader in surrealism and a giant in the history of art.

Arp grew up speaking German, French and the Alsatian dialect of his birthplace. To avoid the German draft in WW I, he fled Alsace for Switzerland where he became a leading member of the original dada group centered around Zurich's Cafe Voltaire, protesting the idiocy of the war and bourgeois values in general. As a dadaist in Zurich in 1916-18, he and Taeuber made geometrical abstract art, always allowing a happy relaxation, a formal gaiety into the composition. He was denied Swiss citizenship when officials decided that his poetry proved him mentally deranged, and left staid Switzerland for Paris, where he became a citizen after Alsace was declared French.

Eventually he became part of a cutting edge that included Kandinsky, Picasso and Mondrian, an acknowledged bulwark of modernism, a founder of dadaism as far back as 1916. His exceptional collages were widely imitated and he also wrote experimental poetry. He and his wife Sophie Taeuber, married in 1921, were co-founders of the Abstraction-Creation group in 1931. She became known as a formidable talent in her own right. In life, she was completely subservient to his career, his major inspiration and deepest human love. She died in early 1943, at 54, suffocated by fumes from a gas heater while visiting a friend's house. Her death depressed him profoundly and his work became more conventional and less magical.

In his later years, Arp was an icon, revered and covered with honors. He died on 6/07/1966 in Basel, Switzerland.