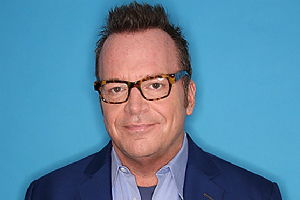 Thomas Duane "Tom" Arnold (born March 6, 1959) is an American actor and comedian. He has appeared in many films, perhaps most notably True Lies (1994). He was the host of The Best Damn Sports Show Period for four years.

Arnold was born in Ottumwa, Iowa, the son of Linda Kay (née Graham) and Jack Arnold. He has six siblings: Lori, Johnny, Scott, Chris, Marla, and Mark. His mother left the family when Arnold was a child, and Arnold and his siblings were subsequently raised by his father. During his youth, he worked at a meatpacking plant. Arnold attended Ottumwa High School, Indian Hills Community College, and the University of Iowa (from 1981 to 1983), where he studied business administration and writing. He began doing stand-up comedy when he was 23.

In the early 1980s, Arnold had a prop-based comedy routine called "Tom Arnold and the Goldfish Review." Roseanne Barr brought him in as a writer for her eponymous television sitcom, Roseanne. He married her in 1990, after she divorced her first husband. Arnold appeared occasionally on the show as the character "Arnie Thomas" (a play on his name). The couple's marriage attracted media and especially tabloid attention due to their sometimes outrageous behavior. In 1992, Arnold starred in his own sitcom, The Jackie Thomas Show. Airing after Roseanne on ABC, the show lasted 18 episodes.

In 1993, Arnold and Barr bought a house together in Arnold's hometown of Ottumwa and opened a restaurant, Roseanne and Tom's Big Food Diner, in nearby Eldon, Iowa. (The diner served loosemeat sandwiches similar to the specialty of the (fictional) Lanford Lunch Box on Roseanne, which in turn was based on the real-life Canteen Lunch in the Alley in Ottumwa.) Both appeared in the 1993 movie The Woman Who Loved Elvis, which was filmed in Ottumwa. Arnold and Barr divorced in 1994, and their restaurant closed in 1995. In a late-1990s interview on radio's Howard Stern Show, Arnold admitted that his share of his and Barr's estate amounted to "over $20,000,000," including a percentage of the Roseanne ABC-TV series, but would not elaborate further, citing a confidentiality clause.

In 1994, Arnold appeared as the sidekick to Arnold Schwarzenegger's character in the James Cameron feature film True Lies. He later supported Schwarzenegger’s bid for the California governorship. The Simpsons have shown Tom Arnold (along with Rosie O'Donnell and Spike Lee) among the "not-so-great" people sent to the sun in a rocket, in their 10th Halloween episode.

Arnold was a host of Fox Sports Net's talk show The Best Damn Sports Show Period. He has also provided the voice for the Arby's "Oven Mitt" character in television commercials for the fast-food chain.

Arnold had his first romantic leading man part in the 2005 movie Happy Endings. That same year, Arnold starred in The Kid & I, which paired him with Eric Gores, the son of billionaire Alec Gores.

Since 2008, Tom hosts the CMT show, "My Big Redneck Wedding." Arnold also hosted a special episode of CMT's "The Biggest Redneck Wedding Ever." In this episode, he served as the wedding planner, created a wedding that exceeded the dreams of a couple who wanted to be married in a mud bog, and performed the actual ceremony.

Arnold's role as a child molester in Gardens of the Night had special significance, as he was the victim of sexual abuse in his childhood. Arnold decided to take on the role to shed more light on the issue.

In August 2008, Arnold broke his scapula in a motorcycle accident on the Pacific Coast Highway.

Arnold met comedian Roseanne Barr when she saw his act in 1983. Their relationship was complicated by his drug and alcohol addiction, but eventually he became sober. The two married in 1990 and divorced in 1994. In an April 2009 interview on Anytime with Bob Kushell, Arnold discussed how when he divorced Barr, he did not take any alimony. During the next ten years, Arnold married two subsequent times. Both marriages ended in divorce.

Over Thanksgiving weekend 2009, Arnold married for the fourth time, to Ashley Groussman, in an intimate ceremony in Maui before 75 family members and friends. Dax Shepard served as Arnold's best man, while jewelry designer Andrea Groussman was the maid of honor. She also designed the newlyweds' rings. During their honeymoon, Arnold and Ashley stopped in Shanghai, China, where Arnold appeared December 10 on the late night talk show Asia Uncut. They have one child, a son, Jax Copeland Arnold, who was born on April 6, 2013.

Arnold was raised a Methodist. He converted to Judaism upon marrying Roseanne Barr in 1990 and still practices Judaism.