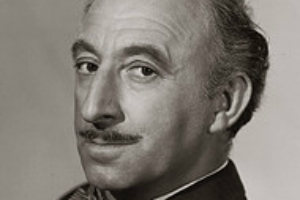 Sig Arno (27 December 1895 – 17 August 1975) was a German-Jewish film actor who appeared in such films as Pardon My Sarong, and The Mummy's Tomb. He may be best remembered from The Palm Beach Story (1942) as "Toto", the nonsense-talking mustachio'd man who follows around Mary Astor's "Princess Centimillia".

Siegfried Arno was born Siegfried Aron in Hamburg, Germany. Before beginning to make films in 1920 he was well known in Germany as a stage comedian. He acted in ninety films in Germany – including G.W. Pabst's Pandora's Box with Louise Brooks – playing primarily comic roles, before leaving the country in 1933, due to the rise of Hitler. He worked in Europe until 1939, when he moved to Hollywood.

During the next twenty years he appeared in over fifty films, often playing waiters, maitre d's and "funny Europeans". Arno also appeared three times on Broadway, notably in the musical Song of Norway and the play Time Remembered by Jean Anouilh, for which he was nominated for a Tony Award as "Best Featured Actor in a Play" in 1958. In 1966, Arno won an honorary award at the German Film Awards "for his continued outstanding individual contributions to the German film over the years."

Arno, who besides acting was also a successful portrait painter, was married three times: