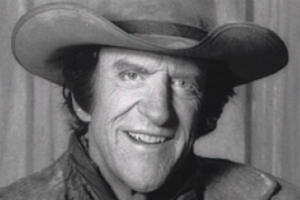 American actor most noted for the TV series "Gunsmoke," 1955-1975, which was an instant hit that retained popularity for 20 years.

As a youngster, Arness left home at age 17. He worked on a freighter, was a radio announcer, sang in the streets for money, worked on road construction and even became a part-time bum living out of an old car. He served in the Army in WW II, from 1943-1945, spending his last year in a hospital after being wounded in the Third Infantry in Italy.

After the war, he enrolled at the University of Minnesota, where he was bitten by the acting bug. While at school, he worked as a substitute radio announcer at station WLOL. The cold winters of Minnesota aggravated Arness' wounded leg, so he packed up and left with a pal for sunny California. He soon landed a small role in a little theater production. Arness was spotted by an agent who put him to work in a movie, "The Farmer's Daughter."

Not ready to grow up and meet success head on, he took off down the California-Mexico coast, living out of his car and adventuring. Back to Hollywood, he again worked at odd jobs, construction and real estate as he tried out for film roles.

His movie break came in 1951 with a classic horror flick that put his 6' 6" size to use, as he played the title role in "The Thing." His rugged good looks got him a contract with John Wayne's production company and the two men became friends. In 1955, Wayne turned down the role of Matt Dillon in "Gunsmoke," recommending Arness for the role. The show was a beloved hit for 20 years.

Arness did five Gunsmoke movies between 1989 and 1994. By 2000, he and Janet were living in Los Angeles and mostly keeping busy with charity projects.