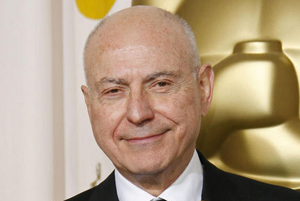 American actor-director-writer, one of only five actors to receive an Academy Award nomination for his first screen appearance, which was in "The Russians are Coming! The Russians are Coming!" 1967: He received the 1967 Golden Globe award for his work. He was also Oscar-nominated for his role in "The Heart is a Lonely Hunter," 1969. Arkin has appeared in well over 50 movie and television films. Some of his more recent roles include "Edward Scissorhands," 1990, "Glengarry Glen Ross," 1992, and "Magicians," 1999. He is directing, writing and acting in "Arigo," 2000.

Arkin is the son of a draftsman, the eldest of three kids, and says that he decided to be an actor at age five. After public high school, he dropped out of three colleges and wound up in Chicago’s Second City improvisational troupe before landing the role in "Enter Laughing," for which he won a Tony Award, 1963.

He gained national recognition in 1966’s "The Russians are Coming! The Russians are Coming!" for which he received an Oscar nomination and a 1967 Golden Globe award. In 1972 he authored the first of six children's books, "Tony's Hard Work Day," and in 1975, a book about his involvement with Agni Yoga, "Halfway Through the Door."

Arkin was married to Jeremy Yaffe from 1955-1960, and had two sons. He met his second wife, Barbara (a descendant of Longfellow and author Richard Henry Dana) in 1963 when he had just been cast for the lead role on Broadway for "Enter Laughing" and she was trying out for a part in the play. They were married in 1964 and had a son in 1967. Though they have appeared together in five films and three plays, she has focused on writing.

Jokingly attributing his Oscar to his age (“Everybody thinks I’m going to keel over in a year or two”), Arkin nevertheless was pleased to accept his Academy Award for best supporting actor on February 25, 2007.