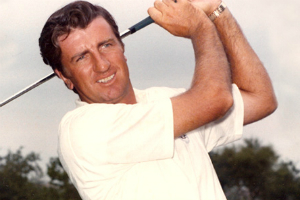 George William Archer (October 1, 1939 – September 25, 2005) was an American golfer who won 12 events on the PGA Tour, including one major championship.

Archer was born in San Francisco, California and was raised just south in the city of San Mateo. He grew to 6 feet 5 1⁄2 inches (1.969 m) tall, and as a boy he dreamed of a basketball career, but took up golf at San Mateo High School after working as a caddy at The Peninsula Golf and Country Club near his home. He turned professional in 1964 and claimed the first of 12 victories on the PGA Tour at the Lucky International Open the following year. The leading achievement of his career was his win at the 1969 Masters Tournament. His other top-10 finishes in the majors came at the U.S. Open, where he finished 10th in 1969, fifth in 1971, and at the PGA Championship, where he took fourth place in 1968.

Archer was hampered by injuries throughout his career and had surgery on his left wrist (1975), back (1979) and left shoulder (1987). In 1996, he had his right hip replaced and two years later became the first man to win on the Senior PGA Tour (now the Champions Tour) after having a hip replacement. He won 19 times on the Senior Tour between 1989 and 2000, but he did not win a senior major. Archer is also the only player in Champions Tour history to win a tournament in each of the first three decades of its existence.

Archer is considered one of the game's all-time great putters, and at one time held the PGA Tour record for fewest putts over four rounds with 94 putts at the 1980 Sea Pines Heritage.

Archer was known as the "Golfing Cowboy," due to a summer job in his youth at his friend and sponsor, Eugene Selvage's Lucky Hereford Ranch in Gilroy, California.

Archer died of Burkitt's lymphoma — a lymphatic system malignancy — in Incline Village, Nevada in 2005. He was survived by his wife, Donna, and two daughters, Elizabeth and Marilyn.

Six months after his death, Archer's widow, Donna, revealed in the March/April 2006 issue of Golf For Women magazine that he had suffered his entire life from a severe form of learning impairment. Despite years of effort and the consultation of many experts, he was never able to read more than the simplest sentences and could only write his own name. She reported that they never revealed this truth beyond their family and that Archer lived in constant fear that the secret of his illiteracy would be revealed.

In 2008, Donna created the George Archer Memorial Foundation for Literacy, a 501(c)(3) organization located in Incline Village, Nevada. The Foundation's mission is to raise funds to identify reading deficiencies, diagnose causes and effective treatments for learning disabilities, improve systems for training teachers, tutors and other educators in literacy issues, provide grants, stipends and scholarships for deserving students, and assist in the development of tools and techniques for the effective teaching of reading and writing skills. The Foundation's primary fundraiser is the George Archer Memorial Stroke of Genius Pro-Am golf tournament held every October since 2008 at the Peninsula Golf and Country Club, in San Mateo, California – the club at which Archer began his golf career.

"When I joined the tour in 1964, I told my wife I wanted to play five years. Instead, I've played five careers."

"If it weren't for golf, I'd probably be a caddie today."