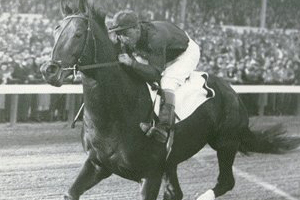 American richest and most famous jockey who has been called the greatest of all time. The winner of five Kentucky Derbies and a record two Triple Crowns, his incredible skill on the track with horses has been legendary.

In 1961, Arcaro retired from 30 years of racing to become a sports announcer. Arcaro was the only son of Italian immigrants. He was married to his first wife, Ruth, for more than 50 years; she died in 1988. They had two kids.

His winnings, combined with shrewd investments in the stock market and oil speculation, made him a multi-millionaire. He also held a share in the saddle business. When Arcaro was not attending most of the major races around the country, he fit in some time for golf. He authored "I Ride To Win."