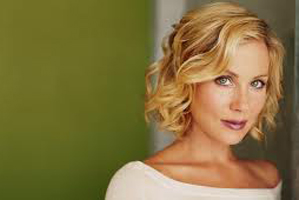 Christina Applegate (born November 25, 1971) is an American actress. She is best known for playing the role of Kelly Bundy on the FOX live-action sitcom Married... with Children.

Since then, she has established a film and television career, winning a Primetime Emmy and earning a Tony and a Golden Globe nominations. She has major roles in several films including Don't Tell Mom the Babysitter's Dead, The Big Hit, The Sweetest Thing, Grand Theft Parsons, Anchorman, Farce of the Penguins, Alvin and the Chipmunks: The Squeakquel, and Hall Pass. She has also starred in numerous Broadway theatre productions such as the 2005 revival of the musical Sweet Charity. As of May 2012, she is starring in NBC's comedy, Up All Night.

Applegate was born in Hollywood, California. Her father, Robert W. Applegate, was a record producer and record company executive,[1] and her mother, Nancy Lee Priddy, a singer and actress. Her parents split up shortly after her birth. She has two half-siblings (Alisa and Kyle) from her father's remarriage. Following her parents' divorce, her mother had a relationship with musician Stephen Stills. It was through Stills' friendship with fellow musicians Paul Kantner and Grace Slick of Jefferson Airplane that Applegate became friends with their daughter, China Kantner.

Applegate made her TV debut with her mother in the soap opera Days of Our Lives and a commercial for Playtex baby bottles at three and five months respectively. Her first big screen appearance followed at age 7 when she was seen in the 1979 film, Jaws of Satan (a.k.a. King Cobra), followed by 1981's Beatlemania. She debuted in a television movie as young Grace Kelly in the biopic, Grace Kelly (1983, opposite Cheryl Ladd) and appeared on her first TV series in Showtime's political comedy, Washingtoon (1985), in which she played a Congressman's daughter. She was also spotted as a guest in the shows, Father Murphy (1981), Charles in Charge (1984 and 1985), and Silver Spoons (1986).

In 1986, Applegate won the role of Robin Kennedy (1986–1987), a policeman's daughter, on the police drama series Heart of the City. Meanwhile, she was also seen guest starring in the sitcoms All is Forgiven, Still the Beaver, Amazing Stories, and Family Ties episode "Band on the Run" (1987) as Kitten.

Applegate eventually scored her most memorable role as the ditzy, sexually promiscuous daughter, Kelly Bundy, on the FOX sitcom, Married... with Children. She portrayed her character for 10 years (1987–97). While working on the series, Applegate was seen in Dance 'til Dawn (1988, NBC) and in Streets (1990), in which a teenage drug addict is stalked by a psychotic police officer. Applegate guest-starred in 21 Jump Street (1988) and Top of the Heap (1991, as Kelly Bundy), and hosted Saturday Night Live (May 8, 1993 and October 13, 2012) and MADtv (1996).

The character of Sue Ellen Crandell in the comedy feature Don't Tell Mom the Babysitter's Dead (1991) was Applegate's first starring role in a mainstream film. She followed it up with films such as Vibrations (1995), Across the Moon (1995), Wild Bill (1995), Mars Attacks! (1996), and Nowhere (1997). After the sitcom Married... with Children was canceled in May 1997, Applegate starred as Claudine Van Doozen in the independent feature Claudine's Return (a.k.a. Kiss of Fire), was cast in the action-comedy The Big Hit, and played the fiancée of a mob descendant in the Mafia satire Jane Austen's Mafia (1998).

Applegate was one of the founding members of the Pussycat Dolls, which debuted at Johnny Depp's Viper Room on the Sunset Strip in 1995.[5][6] Applegate emceed for the group when they moved to The Roxy in 2002.[7]

In 1998, NBC handed her the title role in their sitcom Jesse. The series debuted in 1998, received rave reviews, and brought Applegate a People's Choice Award for Favorite Female Performer in a New TV series and the TV Guide Award for Star of a New Series as well as a nomination at the Golden Globe Awards for Lead Actress in a Comedy. Though the series gained praise, it was canceled in 2000.

The new millennium saw Applegate playing the dual role of a 12th-century noblewoman, Princess Rosalind, and her 21st-century descendant, Julia Malfete, in the time-travel comedy Just Visiting (2001). After gaining wide notice for playing Cameron Diaz's level-headed best friend, Courtney Rockcliffe, in The Sweetest Thing (2002), Applegate continued to win roles in such movies as Heroes (2002), the airplane comedy View from the Top (2003), Wonderland (2003), Grand Theft Parsons (2003), Surviving Christmas (2004), and Employee of the Month (2004). Behind the screen, she was the executive producer of Comforters, Miserable (2001).

Applegate guest-starred on two episodes of Friends, in the ninth (2002) and 10th (2003) seasons, titled "The One with Rachel's Other Sister" and "The One Where Rachel's Sister Babysits" as Amy Green, Rachel Green's (Jennifer Aniston) older sister. She won the Primetime Emmy Award[8] for Best Guest Actress in a Comedy for her performance in "The One with Rachel's Other Sister". On the silver screen, she portrayed TV anchorwoman Veronica Corningstone in the 2004 films Anchorman: The Legend of Ron Burgundy and the bonus film Wake Up, Ron Burgundy: The Lost Movie (an alternative film comprising alternate takes and deleted scenes and story elements).

In addition to her screen work, Applegate has performed on stage in such productions as The Axeman's Jazz, Nobody Leaves Empty Handed, and The Runthrough, as well as John Cassavetes' The Third Day (co-starring Gena Rowlands). In 2004, she debuted on the Broadway stage playing the title role of Charity Hope Valentine in a revival of the 1966 musical Sweet Charity. She eventually took home the 2005 Theatre World Award and was nominated for a 2005 Tony Award for Best Actress in a Musical.

While appearing in Sweet Charity, she broke her foot, and it was announced that the musical would close during previews. She persuaded the producers to rescind their decision and on April 18, 2005, she made her Broadway debut.[9] Sweet Charity ended its Broadway run on December 31, 2005. In 2006, she appeared in an advertising campaign for Hanes titled "Look Who We've Got Our Hanes on Now". The campaign had started in 2005 but she, Jennifer Love Hewitt, and Kevin Bacon were added to the ads in 2006.

Applegate starred in the ABC comedy Samantha Who? from October 15, 2007, until it was canceled on May 18, 2009. The series costarred Jean Smart, Jennifer Esposito, and Melissa McCarthy. The series was about a 30-year-old who, after a hit-and-run accident, develops amnesia and has to rediscover her life, her relationships and herself.[10] Shortly after the cancellation was announced, Applegate began a campaign to get the show back into production,[11] which was unsuccessful.

Applegate topped the list of People Magazine's Most Beautiful People in 2009.[12]

Applegate appeared with her TV brother David Faustino (Bud Bundy from Married with Children) in an episode of Faustino's show Star-ving.[13]

In January 2009, Applegate appeared in the film Everything Is Going to Be Just Fine, which recounted the life of actress Elizabeth Montgomery of television's Bewitched fame, who died of colorectal cancer in 1995.[14]

She also loaned her voice to the character Catherine the Cat in the 3-D talking animal sequel Cats & Dogs: The Revenge of Kitty Galore. According to Applegate, she said it was her mother that wanted her to be involved in the film. Prior to Cats & Dogs 2, she voiced Brittany (one of the Chipettes) in Alvin and the Chipmunks: The Squeakquel (2009) and its sequel Alvin and the Chipmunks: Chipwrecked (2011).

Applegate is currently starring in the NBC sitcom Up All Night which debuted on September 14, 2011. Her co-stars are Maya Rudolph and Will Arnett.[15]

In 2008, Applegate began dating musician Martyn LeNoble. They became engaged on Valentine's Day 2010.[18] It is the second marriage for both. On January 27, 2011, Applegate gave birth to their child, a daughter named Sadie Grace LeNoble.[19]

She is a longtime friend of Lance Bass[20] of the boy band 'N Sync. On July 1, 2008, her close friend and ex-boyfriend Lee Grivas was found dead of an apparent drug overdose.[21]

On August 3, 2008, People magazine reported that Applegate had been diagnosed with breast cancer. This was confirmed by her representative who said in a statement, "Christina Applegate was diagnosed with an early stage of breast cancer. Benefiting from early detection through a doctor-ordered MRI, the cancer is not life-threatening. Christina is following the recommended treatment of her doctors and will have a full recovery. No further statement will be issued at this time."[24] On August 19, 2008, it was announced that Applegate was cancer free after a double mastectomy, even though cancer was found in only one breast.[25] She has an inherited genetic trait, a BRCA1[26] mutation, which often triggers breast cancer. Her mother, Nancy Priddy, is a breast cancer survivor. Applegate said when she first was diagnosed, "I was just shaking and then also immediately, I had to go into 'take-care-of-business-mode' which included a change to a more healthy diet."

In 1992, Applegate joined other celebrities in a benefit show for a Hollywood children's charity, acting as a special guest assistant to a local magician and taking part in a number of illusions including being sawn in half.

In 2003, she was the spokesperson for the Lee National Denim Day, which raises millions of dollars for breast cancer education and research.

Following her diagnosis with breast cancer, Applegate appeared on a television special entitled Stand Up to Cancer designed to raise funds for breast cancer research. The one hour special was broadcast on CBS, NBC, and ABC television networks on September 5, 2008.[30]

In 2009, she announced her plans to return as the ambassador for Lee National Denim Day.

In 2009, she founded Right Action for Women, a charitable foundation dedicated to breast cancer screening for women, and focused on the type of MRI scan which saved her life.