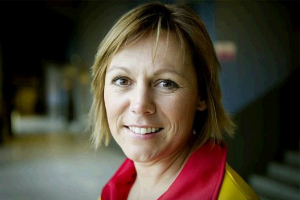 Belgian tennis player, the winner of seven singles and one doubles Corel WTA Tour Titles and one ITF Women's Circuit Singles Title. An outstanding player with a lethal forehand, Appelmans' won her first major tournament title at the 1991 Arizona Classic.

Sabine began playing tennis at the age of seven after she attended her first tennis clinic, which was split into groups of left and right handed players. Her best friend, with whom she attended the clinic, happened to be left handed.

Although Sabine is naturally right handed, she decided to go with her friend at the clinic and has played tennis left handed ever since. She developed her skill over the next four years, and by the age of 11 was good enough to be sent to a special tennis school. Sabine has received many honors over the course of her career, some tennis related, some non-tennis related. In 1990 and 1991 she was selected the Belgian Sportswoman of the year.

In 1994 and 1995, she was nominated, but did not win, the Karen Krantzcke Sportsmanship Award. In 1997, she was selected the most beautiful female player of the WTA, beating out Kandarr and Graff. In addition, readers of the Belgian magazine "Panorama" have named Sabine "the ideal woman" twice.

She currently resides in Aalst, Belgium where she enjoys water-skiing, basketball, swimming, reading, listening to music, and watching movies. A lover of Italian food and new places, the one thing that Sabine most loves about her life is the travel opportunities that her job affords her.