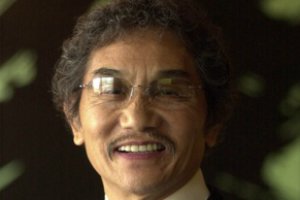 Hiroaki Aoki (October 9, 1938 – July 10, 2008), known in the United States by the Anglicized name Rocky Aoki, was a Japanese-American wrestler, the founder of the Benihana chain of "Japanese Steakhouse" restaurants, entrepreneur, and thrillseeker.

Born in Tokyo, Aoki and some friends started a rock and roll band called Rowdy Sounds, though Aoki eventually abandoned music for athletics. He would later explain, "I play bass. But I tell you why I change to wrestling: No good on tempo." Aoki attended Keio University, where he competed in track and field, karate and wrestling before being expelled for fighting. He qualified for the 1960 Summer Olympics in Rome, but did not compete. However, he later toured the United States and was undefeated in the wrestling 112-pound flyweight class.

Move to the United States

In New York, Aoki worked seven days a week in an ice cream truck that he rented in Harlem while studying restaurant management at New York City Community College. After he received his Associates degree in management in 1963, he used the $10,000 he had saved from the ice cream business to convince his father to co-invest in the first Benihana, a four-table teppanyaki restaurant on West 56th Street. "Benihana", taken from the Japanese name for safflower, was suggested by Aoki's father. According to family legend, Aoki's father was walking through the bombed-out ruins of post-war Tokyo when he happened across a single red safflower growing in the rubble.

He was an offshore powerboat racer along with the 1986 APBA world champion Powerboat throttleman Errol Lanier, a former Fort Lauderdale, Florida fireman who saved his life in a near fatal powerboat crash in 1979 under the Golden Gate Bridge.

Rocky once said that he had 'three kids from three different women at exactly the same time'. He found out about the third child with the third woman when he was sued for paternity. In 2005, Rocky sued four of his children (Grace, Kevin, Kyle, and Echo) for an alleged attempt to take control of the companies he founded, which, at the time, had an estimated value between USD $60–100 million.

Before his death, he had become a United States citizen. Aoki was the recipient of The International Center in New York's Award of Excellence. He died of pneumonia in New York. At the time of his death he had been suffering from diabetes, Hepatitis C, and cirrhosis of the liver. His Hepatitis C was reportedly the result of a blood transfusion after a 1979 speedboat crash under the Golden Gate Bridge.