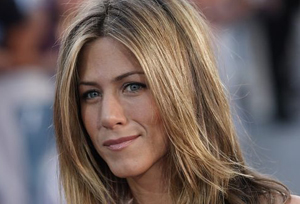 Jennifer Aniston (born February 11, 1969) is an Emmy- and Golden Globe-winning American film and television actress. Aniston began appearing in stage productions in the late 1980s. After several lesser-known film and television roles during the early 1990s, Aniston came to fame playing Rachel Green on the hugely popular television sitcom Friends for which she won a Golden Globe and an Emmy Award.

She has since focused heavily on her film career, having starred in several successful Hollywood films, including Bruce Almighty, Along Came Polly and The Break-Up. Aniston was married to, and eventually divorced from, actor Brad Pitt.

Jennifer Aniston's most memorable contribution to 90's pop culture is "the Rachel," a hairstyle that became very popular, and is symbolic of Aniston's popularity, her rise as a top Hollywood actress, and celebrities' influence on American fashion.

Early life
Aniston was born in Sherman Oaks, California and grew up in New York City. She is the daughter of the Greek-American actor John Aniston (originally Ioannis Anastasakis) and actress Nancy Dow. Aniston has two half-brothers, John Melick and Alex Aniston. Aniston's father was born in the island of Crete, while her maternal grandfather, Gordon McLean Dow, was of Scottish and English descent, and her maternal grandmother, Louise Grieco, was of Italian ancestry. Aniston's godfather was the late Greek American actor Telly Savalas, her father's best friend. Aniston spent part of her childhood in Greece, but most of it in New York City, where her father appeared in the soap operas Love of Life and Search for Tomorrow. In 1985, the family moved to Los Angeles, where Aniston's father starred on the soap opera Days of our Lives as Victor Kiriakis. Aniston graduated from Manhattan's Fiorello H. Laguardia High School of Arts and Performing Arts. Among her high school friends was future gay rights activist Chastity Bono. Aniston's desire to become an actress grew as she worked in Off-Broadway productions such as For Dear Life and Dancing on Checker's Grave. During this time, she supported herself with several part-time jobs, including working as a telemarketer and bike messenger.

Career
Aniston appeared as a "Nutri-System" girl on The Howard Stern Radio Show in the late 1980s and early 1990s. She moved to Hollywood and was cast in her first television roles in 1990, starring as a regular on the short-lived series Molloy and in the TV movie Camp Cucamonga. She also co-starred in Ferris Bueller, a television adaptation of the 1986 teen movie Ferris Bueller's Day Off, the same year; the series was quickly canceled. Aniston then appeared in two more failed television comedy shows, The Edge and Muddling Through, and guest-starred on Quantum Leap, Herman's Head and Burke's Law. After the string of cancelled shows, along with her appearance in the critically derided 1993 Horror Film, Leprechaun, Aniston seriously considered giving up acting.

Aniston's plans changed, however, after auditioning for Friends, a sitcom that was set to debut on NBC's 1994-1995 fall line-up. The producers of the show originally wanted Aniston to audition for the role of Monica Geller, but she persuaded them that she was better suited for the role of Rachel Green. She was cast in the role and played the character from 1994 until the show ended in 2004. The program was very successful and Aniston, along with her co-stars, gained wide renown among television viewers. Her hairstyle at the time, which became known as the "Rachel", was widely copied. Aniston received a salary of one million dollars per episode for the last two seasons of Friends, as well as five Emmy nominations, including a win for "Outstanding Lead Actress in a Comedy Series". According to the Guinness World Book of Records (2005), Aniston (along with her female costars) became the highest paid TV actress ever with her $1 million-per-episode paycheck for the tenth season of Friends.

Aniston was the very first guest on The Ellen DeGeneres Show. The gifts she brought her are featured on every show.[2] She appeared on a promotional video for Microsoft about Windows 95 alongside her Friends co-star Matthew Perry.

Aniston has starred in several theatrical films, including the cult hit Office Space. She gained the most critical acclaim for her role in the low-budget 2002 film, The Good Girl, directed by Miguel Arteta, playing an unglamorous cashier in a small town. The film opened in relatively few theaters - under 700 in total - taking $14M in the U.S. box office. Jennifer's biggest box office success was her appearance in 2003's Bruce Almighty, in which she played the girlfriend of title character (Jim Carrey); the film grossed $243M at the United States box office and almost twice that worldwide. Aniston's 2004 film, Along Came Polly (opposite Ben Stiller), also did well at the box office after opening at the #1 spot. In late 2005, Aniston headlined two major studio films, Derailed and Rumor Has It, both of which performed fairly at the box office, grossing over $36 million each despite little support from critics. In the same year, she appeared in a European Heineken television commercial frequently aired before UEFA Champions League matches.

In 2006, People magazine voted her Best Dressed. She was also labeled "the natural" by the same magazine. The same year, Aniston appeared in the low-budget drama, Friends with Money, which was first shown at the Cannes Film Festival, received a limited release, and grossed over $13 million. Aniston's next film, The Break-Up, which was released on June 2, grossed approximately $39.17 million during its opening weekend, despite lukewarm reviews. It has currently grossed over $118 million at the U.S. box office and over $203 million worldwide. Aniston was involved in a controversy connected to this movie when outtakes from The Break Up revealing her topless appeared over the internet.

She will co-direct a hospital emergency room-set short film named Room 10, starring Robin Wright Penn and Kris Kristofferson; Aniston has noted that she was inspired to direct by actress Gwyneth Paltrow, who directed a short film in 2006.

Forbes listed Aniston as the 10th richest woman in the entertainment industry for the year 2007. She is behind such powerhouses as Oprah Winfrey, J. K. Rowling, and Jennifer Lopez and is ahead of Britney Spears, Christina Aguilera and the Olsen twins. Aniston's net worth is approximately $110 million. Aniston was also included in the annual Star Salary Top 10 of trade magazine "The Hollywood Reporter" for 2006.