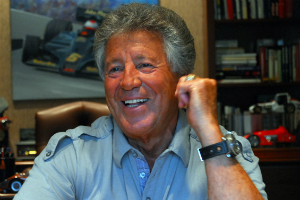 Aldo Andretti (born February 28, 1940 in Montona d'Istria, Italy (now Motovun, Croatia)) is the twin brother of Mario Andretti and the father of John Andretti and Adam Andretti. He is the uncle of Michael Andretti and Jeff Andretti, and great-uncle of Marco Andretti. Aldo and Mario are identical twins. However, due to facial reconstructive surgery following a major racing accident, Aldo does not look identical to Mario.

Aldo and Mario were born in Italy, where they were inspired by watching the great Alberto Ascari race at Monza. After World War II Istria (which is now part of Croatia) was occupied and annexed by Yugoslavia. His family, like many other Italian Istrians, fled in 1948. They lived in a refugee camp from 1948 to 1955. The family settled in Nazareth, Pennsylvania and the brothers discovered racing on an oval track in their home town.

Aldo and Mario rebuilt a 1948 Hudson Hornet into a stock car in 1959, and began racing it. They flipped a coin to see who would race in the first race. Aldo won the coin toss, the heat race and the feature. They each had two wins after the first four weeks. Aldo fractured his skull in a serious crash near the end of the season. He recovered from his coma, and he returned the following season.

Aldo continued racing on the USAC and IMCA circuits, but in 1969 Aldo suffered severe damage to his face after crashing into a fence and quit racing. His face had 14 fractures to his facial bones. Mario described the accident in his book What's it like out there: "Aldo continued racing until August 17, 1969, when he had an accident, which was not his fault, in an IMCA sprint race at Des Moines, Iowa. He was driving a sprint car that I had bought for him."