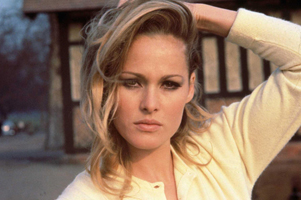 Ursula Andress (born 19 March 1936) is a Swiss-American actress and sex symbol of the 1960s. She is known for her role as Bond girl Honey Rider in the first James Bond film, Dr. No (1962), for which she won a Golden Globe. She later starred as Vesper Lynd in the Bond-parody Casino Royale (1967).

Andress was born in Ostermundigen, Canton of Bern, Switzerland, the daughter of Anna, who was Swiss, and Rolf Andress, a German diplomat who was expelled from Switzerland for political reasons. He disappeared during World War II.

Andress became famous as Honey Rider, a shell diver and James Bond's object of desire in Dr. No (1962), the first Bond movie. In what became an iconic moment in cinematic and fashion history, she rose out of the Caribbean Sea in a white bikini sporting a large diving knife on her hip. Due to her heavy Swiss-German accent, her character's voice was provided by Nikki van der Zyl, while the calypso was sung by Diana Coupland.

The scene made Andress the "quintessential" Bond girl, Andress later said that she owed her career to that white bikini. "This bikini made me into a success. As a result of starring in Dr. No as the first Bond girl, I was given the freedom to take my pick of future roles and to become financially independent." The bikini she wore in the film sold at auction in 2001 for £41,125 ($59,755).

In 2003, in a UK Survey by Channel 4, her entrance in Dr. No was voted #1 in "the 100 Greatest Sexy Moments". Andress won the Golden Globe Award for New Star of the Year in 1964 for her performance in Dr. No. In 1965, she posed nude for Playboy. When asked why she had agreed to do the Playboy shoot she replied coolly, "Because I'm beautiful."

Andress co-starred with Elvis Presley in the 1963 musical film, Fun in Acapulco, with Frank Sinatra and Dean Martin in 4 for Texas (1963), opposite Marcello Mastroianni in The 10th Victim (1965), alongside John Richardson in She (1965), and as the countess in The Blue Max (1966). She also appeared in the Bond satire Casino Royale (1967) as Vesper Lynd, an occasional spy who persuades Evelyn Tremble, as played by Peter Sellers, to carry out a mission. Her heavy accent was dubbed over in Dr. No, but she used her own voice in Casino Royale.

In 1967, Andress turned down the role of Matilda in the British-thriller Berserk!, a role that eventually went to English actress, Diana Dors. In 1981's Clash of the Titans she co-starred with Laurence Olivier. In 1995, Andress was chosen by Empire magazine as one of the "100 Sexiest Stars in film history."

Shortly before his death in 1955, film icon James Dean became involved with 19-year-old Andress. In 1957, she married actor/director John Derek; they divorced in 1966. One of her longest affairs was with Jean-Paul Belmondo while he was still married to his first wife. In 1980, she had a son, Dimitri, with American actor Harry Hamlin, her co-star in the film Clash of the Titans. After her son's birth, Andress scaled back her career, which focused mostly on European TV and films.

On 18 May 2006, on the occasion of the inauguration of the Swiss Consulate General in Scotland, Ursula Andress celebrated her 70th birthday on board the Royal Yacht Britannia in Edinburgh in the company of an international crowd of celebrities.