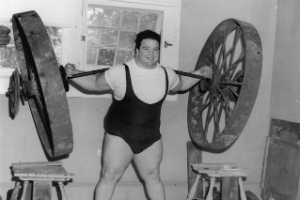 American weight lifter known as "the world's strongest man." In 1957, he lifted more weight in a single attempt than anyone in history, 6,270 pounds in the back lift. Anderson was the Olympics champion for the U.S. at Melbourne on 11/26/1956.

Anderson grew up in Toccoa, Georgia, near the South Carolina border. His first love was football. He wound up as a college football player weighing around 240-250 pounds. He was quick and agile as well as strong, with huge thighs. His interest in weight-lifting started when he played around with a friend’s weights. Since weight-lifting was considered taboo for football players then, he quit the team and concentrated on his career as a weight lifter. He read strength magazines and began working out on his own. Anderson’s appearance in a competition in Gorky Park in the former Soviet Union made such an impression on the local audience that he was called "a wonder of nature" in the Moscow newspaper. In the 1956 Olympics, Anderson was stricken with a strep throat condition and a temperature of 104. He secretly gobbled enough aspirin to reduce his temperature to allow him to compete, and he earned the Gold.

Anderson retired from amateur competition at the early age of 23. He was stronger at 40 than he was at the Melbourne Olympics at 24. In 1957 he earned the Guinness Book of World Records listing for the greatest weight ever lifted by a human being for his 6,270 pound lift. He traveled around the U.S. in the late 1950s performing circus-style strong-man exhibitions to earn a living. To counter those who might pity him for being reduced to a sort of side-show act, he said that he made as much as $100,000 a couple of those years, and the whole time he was earning money for his Boys’ Homes. Of his abilities Anderson said, "I really feel that I was blessed with more God-given strength than anyone who ever lived."

Since 1961 he maintained one of the Paul Anderson Youth Homes for Troubled Boys on his 56-acre property outside of Vidalia, Georgia. There were three other homes in 1984, including one for girls in the Dallas-Fort Worth area, with others planned for the Washington, D.C. area, where Redskins coach Joe Gibbs was on Anderson’s board of directors. Sports stars Tom Landry and Roger Staubach were also members of the board. About a thousand teenagers had gone through his homes by 1984.

At age 52, Anderson was recovering from a near-fatal kidney disease. He had dropped from his prime weight of about 350 pounds to a mere 170 pounds when he entered the University of Minnesota Hospital. Before his kidney transplant in 1983, he had 300 kidney stones removed, one the size of a walnut. Still suffering from vertigo caused by one of the medications he took following surgery, he had regained some of his weight and was back to about 240 pounds. The vertigo, slowly fading away, confined him to chairs and to his golf cart.

In 1984, Anderson resided with his wife, Glenda, and their daughter, Paula, 16, in a beautiful white antebellum-style home near the dormitories for the youth home.