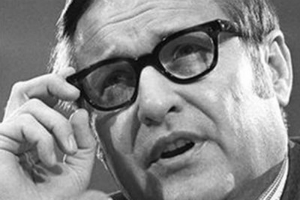 Jack Northman Anderson (October 19, 1922 – December 17, 2005) was an American newspaper columnist, syndicated by United Features Syndicate, considered one of the fathers of modern investigative journalism. Anderson won the 1972 Pulitzer Prize for National Reporting for his investigation on secret American policy decision-making between the United States and Pakistan during the Indo-Pakistani War of 1971. In addition to his newspaper career, Anderson also had a syndicated radio show with the Mutual Broadcasting Network, acted as Washington bureau chief of Parade Magazine, and was a commentator on ABC-TV's Good Morning America for nine years.

Jack Anderson was a key and often controversial figure in reporting on J. Edgar Hoover's apparent ties to the Mafia, the Watergate scandal, and the John F. Kennedy assassination. He also broke open the investigation and harassment by the Nixon administration of John Lennon during the fight to deport Lennon, the search for fugitive ex-Nazi officials in South America and the savings and loan crisis. He discovered a CIA plot to assassinate Fidel Castro, and was credited for breaking the Iran–Contra affair, though he has said the scoop was "spiked" because he had become too close to President Ronald Reagan.

Anderson was born in Long Beach, California, to Orlando and Agnes Mortensen Anderson, devout Mormons of Swedish and Danish descent. He grew up in Salt Lake City, Utah, and served two years as a Mormon missionary in the church's Southern States Mission. Anderson's aptitude for journalism appeared at the early age of 12 when he began writing the Boy Scouts Column for The Deseret News. His writing career began at his local newspaper, The Murray Eagle. Anderson also edited his high school newspaper, The Granitian. He joined The Salt Lake Tribune in 1940, where his muckraking exploits included infiltrating polygamous Mormon fundamentalist sects. He served in the U.S. Armed Forces during World War II in China, where he reportedly fought the Japanese alongside Chinese guerrillas and worked on the Shanghai edition of Stars and Stripes.

After a stint as a war correspondent during 1945, he was hired by Drew Pearson for the staff of his column, the "Merry-Go-Round," which Anderson took over after Pearson's death in 1969. In its heyday, Anderson's column was the most influential and widely read in the U.S.; published in nearly a thousand newspapers, he reached an audience of 40 million.

He co-founded Citizens Against Government Waste with J. Peter Grace in 1984.

Anderson feuded with FBI chief J. Edgar Hoover in the 1950s, when he exposed the scope of the Mafia, a threat that Hoover had long downplayed. Hoover's retaliation and continual harassment lasted into the 1970s. Hoover once described Anderson as "lower than the regurgitated filth of vultures."

Anderson told his staff, "Let's do to Hoover what he does to others." Anderson had his people go through Hoover's garbage, a tactic that the FBI used in the surveillance of political dissidents. Anderson's investigations were a tipping point in the attitude of the public and the press towards Hoover. Prior to Anderson's exposés few people of stature had dared to publicly criticize Hoover. After Anderson, many followed suit, and the man who had been the public persona of exemplary law enforcement became exposed for his failures and dubious activities in the areas of organized crime and civil rights, many of which were of questionable legality.

Anderson grew close to Joseph McCarthy, and the two exchanged information from sources, but when Pearson went after McCarthy, Anderson reluctantly followed at first, then actively assisted with the eventual downfall of his one-time friend.

In the mid-1960s, Anderson exposed the corruption of Senator Thomas J. Dodd and unearthed a memo by an ITT executive admitting the company paid off Richard Nixon's campaign to stymie anti-trust prosecution. His reporting on Nixon-ITT corruption earned him a place on the Master list of Nixon's political opponents.

Anderson collaborated with Pearson on "The Case Against Congress," published in 1968.

According to the family jewels documents, in 1971, during the Indo-Pakistani War, the director of the CIA, Richard Helms, put Anderson under tap. Jack Anderson had written two articles on assassination attempts on Castro through John Roselli.

In 1972, Anderson was the target of an assassination plot in the White House. Two Nixon administration conspirators admitted under oath they plotted to poison Anderson on orders from senior White House aide Charles Colson. White House "plumbers" G. Gordon Liddy and E. Howard Hunt met with a CIA operative to discuss the possibilities, including drugging Anderson with LSD, poisoning his aspirin bottle, or staging a fatal mugging. The plot was aborted when the plotters were arrested for the Watergate break-in. Nixon had long been angry with Anderson, blaming Anderson's election eve story about a secret loan from Howard Hughes to Nixon's brother for Nixon's loss of the 1960 presidential election. Anderson remained a target of FBI investigation after his death; in February 2006, the FBI contacted Anderson's family to obtain his files and search for classified documents. The FBI agents claimed to be looking for documents pertaining to American Israel Public Affairs Committee (AIPAC) as part of an espionage investigation. In November 2006, the FBI quietly gave up its pursuit of the archive. The archive, as revealed in The Chronicle of Higher Education, contains Anderson's CIA file, along with information about prominent public figures such as Richard Nixon, Ronald Reagan, Thomas Dodd, and J. Edgar Hoover.

In 1988, Anderson hosted a prime-time television special entitled American Expose: Who Murdered JFK? that asserted the assassination of John F. Kennedy was a conspiracy involving an alliance between organized crime and the Cuban government. His theory was based on interviews with mobster John Roselli who said he learned of a conspiracy through mob sources. According to Anderson, Kennedy was wanted dead by Cuban leader Fidel Castro in retaliation for CIA plots to kill Castro, and by leaders of La Cosa Nostra in the United States due to Robert F. Kennedy's efforts against organized crime. He said that Santos Trafficante, Carlos Marcello, and Jimmy Hoffa had the "motive and means to kill the president", and reiterated reports connecting Lee Harvey Oswald and Jack Ruby to the mob. Anderson also alleged that Lyndon B. Johnson covered-up the conspiracy for fear that public knowledge of the CIA plots would trigger war with the Soviet Union.

According to Anderson's report, private photographic analysts concluded that the shot that killed Kennedy came from the front, and that E. Howard Hunt and James Earl Ray were depicted in photographs of the "three tramps". Hunt denied the charge on the program, and an Associated Press writer described it as a "bizarre allegation" to which Anderson provided "no explanation of their alleged connection".

To demonstrate the threat of terrorism within the U.S. Capitol, in 1989, Anderson brought a gun to an interview in the office of then Senate minority leader Bob Dole. This led to a reprimand and a change of rules for reporters.

Anderson had a staff of legmen on his payroll, who earned little but gained valuable experience. Among Anderson's legmen—reporters who actually went out into the field and gathered the information, forwarding it on to writers such as Anderson—was Brit Hume, later a reporter for ABC News and Washington managing editor for the Fox News Channel.

Anderson was diagnosed with Parkinson's disease in 1986. In July 2004, at the age of 81, Anderson retired from his syndicated column, "Washington Merry-Go-Round." He died of complications from Parkinson's disease, survived by his wife, Olivia, and nine children.

A few months after his death, the FBI attempted to gain access to his files as part of the AIPAC case on the grounds that the information could hurt U.S. government interests.