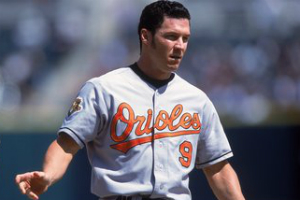 Brady Kevin Anderson (born January 18, 1964) is an American former outfielder with the Baltimore Orioles, Boston Red Sox and Cleveland Indians of Major League Baseball. In 1996 as a member of the Orioles, Anderson hit 50 home runs, setting a record for the team, although that number has since been surpassed by Chris Davis in 2013.

Anderson was born in Silver Spring, Maryland on January 18, 1964 and attended Carlsbad High School in Carlsbad, California. After graduating, he went on to study economics at the University of California, Irvine where he played outfield and first base for the Anteaters.He left college following his junior season after being drafted in the 10th round of the 1985 Major League Baseball Draft by the Boston Red Sox.

Anderson made his major league debut on April 4, 1988. On July 30, he and Curt Schilling were traded to the Baltimore Orioles for Mike Boddicker in one of the most lopsided deals in baseball history. Anderson hit his first major league home run on August 6 off of Milwaukee's Tom Filer at Baltimore's Memorial Stadium.

In only his first season as a full-time player in 1992, Anderson played in all but three of the Orioles games and led the major leagues with 749 plate appearances. He earned his first of three All-Star nominations and played in the 1992 All-Star Game at San Diego on July 14. By season's end, he had become the first player in American League history to reach 20 homers, 50 steals and 75 RBI in a season. Anderson finished 15th in AL MVP voting.

Despite missing 15 games with chicken pox and patellar tendinitis in both knees that plagued him throughout the first half of the 1993 season, Anderson led all American League leadoff hitters in extra-base hits (56) and RBI (62). He also led the Orioles in eight offensive categories, including runs scored (87), stolen bases (24), walks (82), triples (8), and extra base hits (57). He batted .571 (8-14) with the bases loaded - the fourth highest total in the American League.

The 1994 season was cut short two months by the player's strike. Anderson led all American League left fielders with a 1.000 fielding percentage, and his 31 stolen bases in 32 attempts was a major league record for 25 or more steals.

On June 12, Anderson set an American League record with 34 consecutive stolen bases. The streak ended on July 3 at 36 when he was caught by Minnesota Twins catcher Matt Walbeck. His record was eclipsed by Chicago's Tim Raines later in the year and was matched by Toronto's Paul Molitor. Anderson was the hardest to double up in the American League, grounding into only three double plays on the year - once every 184.7 at-bats. He hit two home runs on September 5, the night teammate Cal Ripken, Jr. tied Lou Gehrig's consecutive games played record of 2130. On September 6, Anderson spoke on behalf of his teammates at a post-game ceremony honoring Ripken's 2131st consecutive game.

Anderson went into the final game of the 1996 season with 49 home runs. In his first at-bat, he hit his 50th homer off Cy Young Award winner Pat Hentgen, breaking Frank Robinson's record for most home runs in a season by a Baltimore Oriole. He also became the only player in major league history to be in the 50–20 club and the 20–50 clubs. Anderson also shattered the major league record by leading off four consecutive games with a home run. The previous mark was two straight games, done 33 times. In the annual Baseball America "Tools of the Trade" poll, Brady was named as the league's third-best defensive outfielder, behind only Seattle's Ken Griffey, Jr. and Cleveland's Kenny Lofton. Anderson also hit 37 doubles and five triples and led the American League in extra base hits with 92, breaking the Orioles club record previously held by Cal Ripken, Jr.

"Because I only hit 50 home runs once, it was, in fact, an aberration. However, it was not a fluke", he told the Baltimore Sun (March 20, 2004). "Nothing can be considered a fluke that takes six months to accomplish. Rather it was a culmination of all my athleticism and baseball skills and years of training peaking simultaneously... Hitting in front of [Roberto] Alomar, [Rafael] Palmeiro, [Bobby] Bonilla and [Cal] Ripken didn't hurt, either."

Anderson added that while the 50 homers may have been 26 more home runs than he hit in any other season, "that's just one more home run per week, just one more good swing. That is the data that simultaneously comforted me and haunted me, the small difference between greatness and mediocrity."

Added former teammate Ripken: "Brady always had a much more advanced concept of cross-training and plyometrics and his diet. He was just ahead of the curve... To me, (that season) was all about him being locked in. He had good swings every at-bat. Bearing witness to it all year, he was a marvel to watch. I don't remember him ever being in a slump... Brady always had a fly-ball swing, which he was criticized for as a leadoff hitter, but that year he was right on the ball. He was just in one of those grooves. There were a couple of instances in my career when I seemed to pick up the next day where I left off. It's hard to explain. You wish you could do that every year."

Despite playing most of the 1997 season with a broken rib, Anderson led the Orioles to a wire-to-wire American League East title with a record of 98-64. Anderson made his third All-Star appearance at the 1997 All-Star Game in Cleveland, where he played the entire game in the leadoff spot for the American League and went 2 for 4 with a double high off the 19-foot left field wall against pitcher Curt Schilling.

Anderson appeared on the cover of the Konami video game Bottom of the 9th '99. The game was released on August 31, 1998 for the PlayStation.

In 1999, Anderson rebounded from an injury-plagued 1998 campaign for one of the best all-around seasons of his career. He led American League leadoff hitters with a .408 on-base percentage and reached base 279 times, ninth most in the league. For the season, Anderson batted .282 with 28 doubles, 5 triples, 24 home runs, 109 runs scored, 81 runs batted in, 36 stolen bases, 96 walks, and 24 hit by pitch. He became the only leadoff hitter in history with three 75 RBI seasons to his credit. On May 23, Anderson became the first player in American League history to be hit by a pitch twice in the same inning. He broke his own American League record for hit by pitch in a season by a left-handed batter, set in 1996. The previous record was held by Washington's Harry Gessler, who was hit 20 times in 1911. In a post-season statistical analysis by Baseball America, Anderson was rated as the best leadoff hitter in the American League.

On August 21, 2004, Anderson was inducted into the Baltimore Orioles Hall of Fame. Cal Ripken, Jr. introduced Anderson and called him "the greatest leadoff hitter in Orioles baseball, and the best athlete I have ever played with." During Ripken's induction ceremony to the Baseball Hall of Fame in 2007, he described Anderson as "simply my best friend."

In 2006, Anderson became a co-owner of the ABA's Hollywood Fame. He also served as Chairman of the ABA Sports and Entertainment Advisory Committee.

In 2012, Anderson was named special assistant to the executive vice president of baseball operations by the Baltimore Orioles.

In 2013, Anderson was promoted by the Baltimore Orioles to the role of Vice President of baseball operations.

Brady Anderson's current events consist of a recent trip to Japan with Cal Ripken, Jr. to visit towns ravaged by the earthquake and tsunami. November 1, 2011 marked a joint announcement by the U.S. Department of State's Bureau of Educational and Cultural Affairs, the U.S. Embassy in Tokyo, and Ripken Baseball, Inc. that Cal Ripken, Jr. would be traveling to Japan later in November 2011 to conduct baseball clinics, various events, and motivational activities for the youth of Japan in Tokyo, Ofunato, Nishinomiya, and Kyoto.Shortly thereafter it was announced that Brady Anderson would be joining Ripken on his journey to Japan, which makes this the first trip for Anderson as a "sports diplomat".Anderson was an obvious choice for a companion for Ripken because it is said that Anderson is someone who "could help on the mission, spread goodwill and be with kids".Anderson and Ripken will be joined by Japanese baseball's Sachio Kinugasa.

The trip took place November 8–16, 2011, and included visits to several towns affected by the March 2011 earthquake and tsunami.During the trip to Japan, Anderson and Ripken hosted baseball and softball clinics, as well as attending events. Soon after arriving in Japan, a reception was held at the Ambassador's residence in Tokyo, and featured photographs of Anderson and Ripken with young baseball players from the area.In Ofunato Japan, the turnout was great with around 70 Jr. High school age students from the area coming out to take part in the clinic conducted by Anderson, Ripken, and Kinugasa.