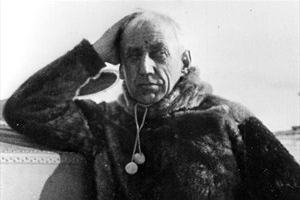 Roald Engelbregt Gravning Amundsen (July 16, 1872 – c. June 18, 1928) was a Norwegian explorer of polar regions. He led the first Antarctic expedition to the South Pole between 1910 and 1912. He was also the first person to reach both the North and South Poles. He is known as the first to traverse the Northwest Passage. He disappeared in June 1928 while taking part in a rescue mission. With Douglas Mawson, Robert Falcon Scott, and Ernest Shackleton, Amundsen was a key expedition leader during the Heroic Age of Antarctic Exploration.

Early life
Amundsen was born to a family of Norwegian shipowners and captains in Borge, between the towns Fredrikstad and Sarpsborg. His father was Jens Amundsen. The fourth son in the family, his mother chose to keep him out of the maritime industry of the family and pressured him to a doctor, a promise that Amundsen kept until his mother died when he was aged 21, quitting university for a life at sea. Amundsen had hidden a lifelong desire inspired by Fridtjof Nansen's crossing of Greenland in 1888 and the doomed Franklin expedition. As a result, he decided on a life of exploration.

Belgian Antarctic Expedition 1897–99
He was a member of the Belgian Antarctic Expedition (1897–99) as second mate. This expedition was led by Adrien de Gerlache, using the ship the Belgica, became the first expedition to winter in Antarctica. The Belgica, whether by mistake or design, became locked in the sea ice at 70°30'S off Alexander Land, west of the Antarctic Peninsula. The crew then endured a winter for which the expedition was poorly prepared. By Amundsen's own estimation, the doctor for the expedition, American Frederick Cook, probably saved the crew from scurvy by hunting for animals and feeding the crew fresh meat, an important lesson for Amundsen's future expeditions.

Northwest Passage
In 1903, Amundsen led the first expedition to successfully traverse the Northwest Passage between the Atlantic and Pacific Oceans (something explorers had been attempting since the days of Christopher Columbus, John Cabot, Jacques Cartier, and Henry Hudson), with six others in a 47 ton steel seal hunting vessel, Gjøa. Amundsen had the ship outfitted with a small, gas engine. They travelled via Baffin Bay, Lancaster and Peel Sounds, and James Ross and Rae Straits and spent two winters near King William Island in what is today Gjoa Haven, Nunavut, Canada.

During this time Amundsen learned from the local Netsilik people about Arctic survival skills that would later prove useful. For example, he learned to use sled dogs and to wear animal skins en lieu of heavy, woolen parkas. After a third winter trapped in the ice, Amundsen was able to navigate a passage into the Beaufort Sea after which he cleared into the Bering Strait, thus having successfully navigated the Northwest Passage. Continuing to the south of Victoria Island, the ship cleared the Canadian Arctic Archipelago on August 17, 1905, but had to stop for the winter before going on to Nome on the Alaska Territory's Pacific coast. Five hundred miles (800 km) away, Eagle City, Alaska, had a telegraph station; Amundsen travelled there (and back) overland to wire a success message (collect) on December 5, 1905. Nome was reached in 1906. Due to water as shallow as 3 feet (0.91 m), a larger ship could never have used the route.

It was at this time that Amundsen received news that Norway formally became independent of Sweden and had a new king. Amundsen sent the new King Haakon VII news that it "was a great achievement for Norway." He hoped to do more he said and signed it "Your loyal subject, Roald Amundsen."

South Pole expedition (1910–12)
Main article: Amundsen's South Pole expedition
After crossing the Northwest Passage, Amundsen made plans to go to the North Pole and explore the North Polar Basin. Amundsen had difficulty raising funds for the departure and upon hearing in 1909 that first Frederick Cook and then Robert Peary claimed the Pole, he decided to reroute to Antarctica. However, he did not make these plans known and misled both Scott and the Norwegians. Using the ship Fram ("Forward"), earlier used by Fridtjof Nansen, he left Norway for the south, leaving Oslo on June 3, 1910. At sea, Amundsen alerted his men that they would be heading to Antarctica in addition to sending a telegram to Scott notifying him simply: "BEG TO INFORM YOU FRAM PROCEEDING ANTARCTIC--AMUNDSEN." The expedition arrived at the eastern edge of Ross Ice Shelf at a large inlet called the Bay of Whales on January 14, 1911 where Amundsen located his base camp and named it Framheim. Further, Admundsen eschewed the heavy wool clothing worn on earlier Antarctic attempts in favour of Eskimo-style skins.

Using skis and dog sleds for transportation Amundsen and his men created supply depots at 80°, 81° and 82° South, along a line directly south to the Pole. Amundsen also planned to kill some of his dogs on the way and use them as a source for fresh meat. After a premature attempt to set out on 8 September 1911 the Pole team consisting of Olav Bjaaland, Helmer Hanssen, Sverre Hassel, Oscar Wisting and Amundsen himself departed on 19 October 1911. They took four sledges and 52 dogs. Using a route along the previously unknown Axel Heiberg Glacier they arrived at the edge of the Polar Plateau on November 21 after a four-day climb. On 14 December 1911, the team of five, with 16 dogs, arrived at the Pole (90°00'S). They arrived 35 days before Scott's group. Amundsen named their South Pole camp Polheim, "Home on the Pole". Amundsen renamed the Antarctic Plateau as King Haakon VII's Plateau. They left a small tent and letter stating their accomplishment, in case they did not return safely to Framheim. The team returned to Framheim on January 25, 1912 with 11 dogs. Amundsen's success was publicly announced on 7 March 1912, when he arrived at Hobart, Australia.

Amundsen's expedition benefited from careful preparation, good equipment, appropriate clothing, a simple primary task (Amundsen did no surveying on his route south and is known to have taken only two photographs), an understanding of dogs and their handling, and the effective use of skis. In contrast to the misfortunes of Scott's team, the Amundsen's trek proved rather smooth and uneventful.

In Amundsen's own words:

"I may say that this is the greatest factor -- the way in which the expedition is equipped -- the way in which every difficulty is foreseen, and precautions taken for meeting or avoiding it. Victory awaits him who has everything in order -- luck, people call it. Defeat is certain for him who has neglected to take the necessary precautions in time; this is called bad luck."
--from The South Pole, by Roald Amundsen.

In 1918 Amundsen began an expedition with a new ship Maud, which was to last until 1925. Maud sailed West to East through the Northeast Passage, now called the Northern Route (1918-1920). Amundsen planned to freeze the Maud into the polar ice cap and drift towards the North Pole (as Nansen had done with the Fram), but in this he was not successful. However, the scientific results of the expedition, mainly the work of Harald Sverdrup, were of considerable value.

In 1925, accompanied by Lincoln Ellsworth, pilot Hjalmar Riiser-Larsen and three other team members, Amundsen took two aircraft, the N-24 and N-25 to 87° 44' north. It was the northernmost latitude reached by plane up to that time. The planes landed a few miles apart without radio contact, yet the crews managed to reunite. One of the aircraft, the N-24 was damaged. Amundsen and his crew worked for over three weeks to clean up an airstrip to take off from ice. They shovelled 600 tons of ice on 1 lb (400 g) of daily food rations. In the end six crew members were packed into the N-25. In a remarkable feat, Riiser-Larsen took off and barely became airborne over the cracking ice. They returned triumphant when everyone thought they had been lost for ever.

In 1926, Amundsen, Ellsworth, Riiser-Larsen, Wisting and Italian aeronautical engineer Umberto Nobile made the first crossing of the Arctic in the airship Norge designed by Nobile. They left Spitsbergen on May 11, 1926 and landed in Alaska two days later. The three previous claims to have arrived at the North Pole – by Frederick Cook in 1908, Robert Peary in 1909, and Richard E. Byrd in 1926 (just a few days before the Norge) – are all disputed, as being either of dubious accuracy or outright fraud. Some of those disputing these earlier claims therefore consider the crew of the Norge to be the first verified explorers to have reached the North Pole. If the Norge expedition was actually the first to the North Pole, Amundsen and Wisting would therefore be the first persons to attain each geographical pole.

Amundsen disappeared on June 18, 1928 while flying on a rescue mission with Norwegian pilot Leif Dietrichson, French pilot Rene Guilbaud, and three more Frenchmen, looking for missing members of Nobile's crew, whose new airship the Italia had crashed while returning from the North Pole. Afterwards, a pontoon from the French Latham 47 flying-boat he was in, improvised into a life raft, was found near the Tromsø coast. It is believed that the plane crashed in fog in the Barents Sea, and that Amundsen was killed in the crash, or died shortly afterwards. His body was never found. The search for Amundsen was called off in September by the Norwegian Government. In 2003 it was suggested that the plane went down northwest of Bjørnøya (Bear Island).

Legacy
A number of places have been named after him:

The Amundsen-Scott South Pole Station is named jointly with his rival.
Amundsen Sea, off the coast of Antarctica.
Amundsen Glacier in Antarctica.
Amundsen Gulf, in the Arctic Ocean, off the coast of the Northwest Territories in Canada (separating Banks Island and the western parts of Victoria Island from the mainland).
A large crater covering the Moon's south pole is named Amundsen Crater.
The following ships are named after him:

The Canadian Coast Guard named an icebreaker CCGS Amundsen, whose mission is to perform scientific research in the waters of the Arctic.
The Norwegian Navy is building a class of Aegis frigates, the second of which, is the HNoMS Roald Amundsen (completed 2006).
The German brig Roald Amundsen.
Other tributes include: