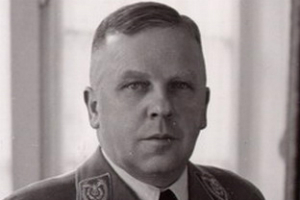 Max Amann (24 November 1891 – 30 March 1957) was a German Nazi official with the honorary rank of SS-Obergruppenführer, politician and journalist.

Amann was born in Munich on 24 November 1891. During World War I he was Adolf Hitler's superior. He served as Feldwebel (equivalent to the US Army Staff Sergeant) in the Royal Bavarian 16th Infantry Regiment. He is credited as being one of very few actual friends of Adolf Hitler.

He joined the NSDAP in October 1921, as the Party's business manager After 1922, he also led the Nazis' publishing house, Eher Verlag, which, among other things, published the SS magazine Das Schwarze Korps.In 1924 he was elected as a NSDAP candidate to the Munich city council and in 1933 became a Nazi member of the Reichstag for the electoral district of Upper Bavaria/Swabia. Perhaps Amann's most notable contribution to history was persuading Hitler to retitle his first book from Four and a Half Years (of Struggle) Against Lies, Stupidity and Cowardice to Mein Kampf, which he also published, and became a major source of Eher-Verlag's income. He lost his left arm in an accident with a firearm while hunting with Franz Ritter von Epp on 4 September 1931 .

Soon after the creation of the Nazi state, Amann was named president of the Reich Media Chamber and Reich Press Leader. In this role, he established National Socialist control over the industry, closing down or seizing newspapers that did not fully support Hitler's regime. He pursued a dual-pronged strategy. In his official role as president of the Media Chamber, he had the power to seize any paper that ran counter to the government's wishes. Then, as head of the Eher Verlag, he bought them for mere pfennigs on the mark--in many cases, via "auctions" in which he was the sole bidder. Combined with the proceeds from Mein Kampf, this eventually made Amann the largest newspaper publisher in Germany and one of the largest in the world. He made a fortune off Nazism; his income jumped from 108,000 RM IN 1934 to 3.8 million RM in 1942.

However, as a party official, Amann lacked talent, being a poor speaker and debater. In addition, his handwriting was illegible, thus his Chief of Staff and deputy, Rolf Rienhardt, performed these duties for him. Rolf Rienhardt was not the adjutant of Max Amann. He died on 16.03.1975.

Arrested by Allied troops after the war, Amann was deemed a Hauptschuldiger (Prominent Guilty Party) and sentenced to ten years in a labour camp on 8 September 1948 but was released in 1953. Stripped of his property, pension rights and practically all of his fortune, he died in poverty on 30 March 1957, in Munich.