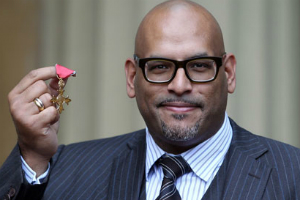 American-British basketball player, a one-time guard for the Cleveland Cavaliers. Growing up in England, John began his career in sports as a promising rugby player, but one visit to a basketball court was all that it took to change the ultimate course that his life took. At the age of 16, Amaechi was an overweight teen who towered above his classmates and was the butt of their school yard jokes in Stockport, England. While playing rugby one day at a local sports club, John saw several people shooting hoops; it was love at first sight and he began playing the game on a daily basis. In a way, the game of basketball became Amaechi's savior, as it provided him with a group of close friends. More importantly, his new-found buddies didn't make fun of him, rather they appreciated his height and the contributions he was able to make to the game. It wasn't long before John decided that he wanted to play in the NBA, a decision that led him to attend high school in Toledo, Ohio.

An excellent high school player, John was able to attract the attention of many top U.S. colleges, ultimately ending up at Vanderbilt University. Amaechi found the transition to college basketball challenging and ended up transferring to Penn State, a setting that he thrived in. Throughout his college career, Amaechi was recognized as one of the best players in the Big Ten league, both in basketball and academically. Leading his team in scoring, rebounding, blocks, and steals, he was selected as first-team academic All-American. While at Penn State Amaechi also became widely known and appreciated in the community for his tireless charity work, most notably with the Big Brother's movement. In addition, John received a degree in psychology and is currently working on a PhD in child clinical psychology.

Among all of these achievements, Amaechi was dealt a devastating blow when he found out that his mother was suffering from terminal cancer; his mother wanted him to finish his college career, which he did. Sadly, she did not live to see him reach his goal of playing in the NBA, a goal that he reached when he signed a contract with the Cleveland Cavaliers in the mid-'90s. In becoming a member of the Cavaliers, Amaechi became the first British player to ever start an NBA game as well as the only Britain to play in an NBA play-off match. After finishing out his contract with Cleveland, John returned to Europe and began playing for the English National Team.

Amaechi counts among his likes music (he claims he cannot survive anything in this world without it), fattening foods, wine, nice cars, and intelligent conversation. Among his dislikes, John lists fish, bigots, and lying, calling this all-too-common practice, "tantamount to emotional terrorism."