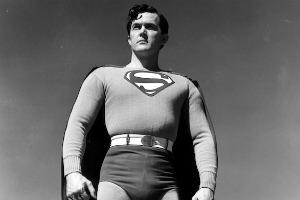 Kirk Alyn was born John Feggo, Jr. in Oxford, New Jersey on October 8, 1910 to Hungarian immigrant parents. In his youth he lived in Wharton, New Jersey. A plaque commemorating his life in the borough is hung in the municipal building.

Alyn started out as a chorus boy on Broadway, appearing in notable musicals such as Girl Crazy, Of Thee I Sing, and Hellzapoppin' in the 1930s.

He also worked as a singer and dancer in vaudeville before moving to Hollywood in the early 1940s to make feature films, where he was successful only in gaining bit parts in low-budget films before landing the role of Superman in 1948.

I thought it was a publicity stunt. I didn't think you could ever put Superman on film. They brought the people from D.C. Comics  over and they said, 'Hey, he looks just like Clark Kent.' They said take off your shirt, so I did and flexed my muscles. Then the guy said, 'Take off your pants' and I said, 'Wait a minute.' I was 37 when I played Superman. I picked up that girl and ran up that flight of stairs like it was nothing."

Alyn appeared as Superman in the first live-action Superman movie serial, released in 1948. The serial consisted of 15 episodes which recounted Superman’s arrival on Earth, getting a job as a reporter at the Daily Planet newspaper, and meeting Lois Lane and Jimmy Olsen. The main plot consisted of Superman’s battle against the arch criminal the Spider Lady.

Two years later, Atom Man vs. Superman was released, featuring Lyle Talbot as Superman’s arch-villain Lex Luthor. This serial also included a sequence involving an eerie alternate dimension, not unlike the Phantom Zone, which would not appear in the comics for another 11 years.

Alyn gave the Man of Steel a different portrayal to Clark Kent, adding to the element of disguise. This was in the tradition of radio's Superman, Bud Collyer. By contrast, his successor George Reeves played the dual roles more alike, as pointed out in Gary Grossman's book, Superman: Serial to Cereal. The character's flight would be effected by having Alyn jump up, at which point he turns into an animated character by way of rotoscoping, and flew off. Alyn had tried "flying" while suspended by hidden wires for the first serial but the wires turned out to be clearly visible after all and that footage was scrapped.

After playing Superman, he again suffered casting problems. Apart from starring in some similar comic book-type serials, he landed few roles in TV series and movies, some even uncredited, until he retired.

When Superman moved to television in 1951, Alyn was reportedly offered the part, but turned it down. In 1971, he published an autobiography entitled A Job for Superman.

Alyn shared a very short cameo with his serial co-star, Noel Neill, as the parents of the young Lois Lane in the 1978 feature film, Superman. In a brief on-set interview, he explains his method of portraying Superman and Clark Kent, contained in a documentary narrated by Ernie Anderson, The Making of Superman: The Movie (1978).

In 1981, Alyn appeared as "Pa Cant" in the parody film "Superbman: The Other Movie", a role that lasted only seconds, as Cant dies from a heart attack immediately after discovering the strange visitor from the planet Krapton.

In 1988 he participated in the 1988 TV special Superman 50th Anniversary Special as himself.

When he first went to Hollywood, Alyn met another dancer/actress, Virginia O'Brien. They were married in 1942, and had one son and two daughters. They were divorced in 1955.

Alyn died on March 14, 1999 in The Woodlands, Texas, at the age of 88. He was survived by three children he had with O'Brien: daughters Terri O'Brien and Elizabeth Watkins, and son John Feggo.

Alyn was the Grand Marshal of the Metropolis, Illinois Christmas parade and Annual Superman Celebrations several times. In 1985, DC Comics named Alyn as one of the honorees in the company's 50th anniversary publication Fifty Who Made DC Great.