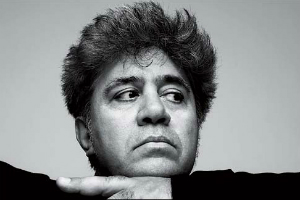 Spanish filmmaker, a director, screenwriter, composer and actor, noted as a leading figure in the new Spanish cinema. Almodóvar's films have gained worldwide interest and developed a cult following.

Formerly a telephone company employee and a contributor to underground magazines and comic books, he began dabbling in amateur filmmaking in 1974. His first film, "Dos Putas" was shot in 8mm.

By the late '80s, he was established as one of Spain's internally best known and most admired directors with work that included "Women on the Verge of a Nervous Breakdown," 1988 and "Tie Me Up! Tie Me Down!" 1990. After 13 features, his 1999 release was "All About My Mother," a film regarded as more consistent and mature.

Openly gay, an enchanting chatterbox with electrified hair, he often creates characters who are gay, lesbian or bisexual, as well as taking great zest in challenging Spain's politically correct stance. Writing his own off-beat scripts, he is his most effective with caustic, irreverent, shocking comedy.

In 1997, Almodóvar received the French Legion of Honour, followed by the Gold Medal of Merit in the Fine Arts by the Spanish Ministry of Culture in 1999.

Almodóvar has been with his partner, the actor and photographer Fernando Iglesias, since 2002.