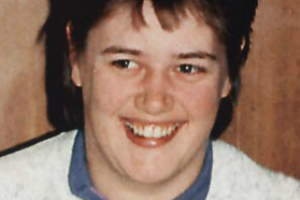 Beverley Gail Allitt (born 4 October 1968) is an English serial killer who was convicted of murdering four children, attempting to murder three other children, and causing grievous bodily harm to a further six children. The crimes were committed over a period of 59 days between February and April 1991 in the children's ward at Grantham and Kesteven Hospital, Lincolnshire, where Allitt was employed as a State Enrolled Nurse. She administered large doses of insulin to at least two victims and a large air bubble was found in the body of another, but police were unable to establish how all the attacks were carried out. In May 1993, at Nottingham Crown Court, she received 13 life sentences for the crimes. Mr. Justice Latham, sentencing, told Allitt that she was "a serious danger" to others and was unlikely ever to be considered safe enough to be released. She is detained at Rampton Secure Hospital in Nottinghamshire.

Liam Taylor (seven weeks old) – was admitted to the ward for a chest infection and was murdered on 21 February 1991.

Timothy Hardwick (eleven years old) – a boy with cerebral palsy who was admitted to the ward after having an epileptic seizure. He was murdered on 5 March 1991.

Kayley Desmond (then one year old) – admitted to the ward for a chest infection. Allitt attempted to murder her on 8 March 1991 but the child was resuscitated and transferred to another hospital, where she recovered.

Paul Crampton (then five months old) – admitted to the ward for a chest infection on 20 March 1991. Allitt attempted to murder him with an insulin overdose on three occasions the day before he was transferred to another hospital, where he recovered.

Bradley Gibson (then five years old) – admitted to the ward for pneumonia. He suffered two cardiac arrests on 21 March 1991, due to Allitt's administering insulin overdoses, before he was transferred to another hospital, where he recovered.

Yik Hung Chan (also known as Henry, then two years old) – admitted to the ward following a fall on 21 March 1991. He suffered an oxygen desaturation attack before he was transferred to another hospital, where he recovered.

Becky Phillips (two months old) – admitted to the ward for gastroenteritis on 1 April 1991. She was administered an insulin overdose by Allitt and died at home two days later.

Katie Phillips (then two months old) – Becky's twin was admitted to the ward as a precaution following the death of her sister. She had to be resuscitated twice after unexplained apnoeic episodes (which were later found to be caused by insulin and potassium overdoses). Following the second time that she stopped breathing, she was transferred to another hospital but, by this time, had suffered permanent brain damage, partial paralysis and partial blindness due to oxygen deprivation. Her parents had been so grateful for Allitt's care of Becky that they had asked her to be Katie's godmother. In 1999 Katie was awarded £2.125 million, by Lincolnshire Health Authority, to pay for treatment and equipment for the rest of her life. Lincolnshire Health Authority did not accept liability, but did acknowledge that Katie was entitled to compensation.

Claire Peck (fifteen months old) – admitted to the ward following an asthma attack on 22 April 1991. After being put on a ventilator, she was left alone in Allitt's care for a short interval during which time she went into cardiac arrest. She was resuscitated but died after a second episode of cardiac arrest, again following a period when she was left alone with Allitt.

Allitt had attacked thirteen children, four fatally, over a 59 day period before she was brought up on charges for her crimes. It was only following the death of Claire Peck that medical staff became suspicious of the number of cardiac arrests on the children's ward and police were called in. It was found that Allitt was the only nurse on duty for all the attacks on the children and she also had access to the drugs.

Four of Allitt's victims had died. She was charged with 4 counts of murder, 11 counts of attempted murder and 11 counts of causing grievous bodily harm. Allitt entered pleas of not guilty to all charges. On 28 May 1993 she was found guilty on each charge and sentenced to 13 concurrent terms of life imprisonment, which she is serving at Rampton Secure Hospital in Nottinghamshire.

Allitt's trial judge recommended she serve a minimum term of 30 years, meaning she would not be released until at least 2022 and the age of 54, and then only if she was no longer considered to be a danger to the public. This represented one of the longest sentences given to a woman in Britain, exceeded only by those given to Rose West and Myra Hindley. In August 2006, Allitt launched an appeal against the length of her sentence. On 6 December 2007, Mr Justice Stanley Burnton, sitting in the High Court of Justice, London, confirmed that Allitt must serve the original minimum sentence of 30 years. It was reported that some families of Allitt's victims had previously mistakenly believed that her minimum tariff had been set at 40 years.

Allitt's motives have never been fully explained. According to one theory, she showed symptoms of factitious disorder, also known as Münchausen syndrome or Münchausen syndrome by proxy which may explain her actions. This controversial disorder is described as involving a pattern of abuse in which a perpetrator ascribes to, or physically falsifies illnesses in someone under their care to attract attention.

In 2005, the BBC made a dramatisation of the story, Angel of Death, in which Charlie Brooks played the role of Allitt.

In 2008, the Beverley Allitt story was depicted in an episode of the crime documentary, Crimes That Shook Great Britain.