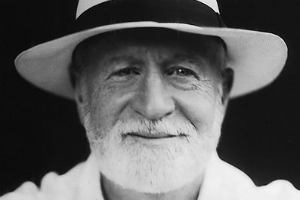 Allison was born in Tippo, Mississippi. He played piano in grammar school and trumpet in high school. He went to college at the University of Mississippi for a while, then enlisted in the U.S. Army for two years. Shortly after mustering out, he enrolled at Louisiana State University, from which he was graduated in 1952 with a BA in English with a minor in Philosophy. In 1956 he moved to New York City and launched his jazz career performing with artists such as Stan Getz, Gerry Mulligan, Al Cohn, Zoot Sims, and Phil Woods. His debut album, Back Country Suite, was issued on the Prestige label in 1957. He formed his own trio in 1958.

It was not until 1963 that his record label allowed him to release an album entirely of vocals. Entitled Mose Allison Sings, it was an inspired collection of songs that paid tribute to artists of the Mojo Triangle: Sonny Boy Williamson ("Eyesight to the Blind"), Jimmy Rogers ("That's All Right") and Willie Dixon ("The Seventh Son"). However, it was an original composition in the album that brought him the most attention, "Parchman Farm." For more than two decades, "Parchman Farm" was his most requested song. He dropped it from his playlist in the 1980s because some critics felt it was politically incorrect. Explained Allison to Nine-O-One Network Magazine: "I don't do the cotton sack songs much anymore. You go to the Mississippi Delta and there are no cotton sacks. It's all machines and chemicals."

His music has influenced many blues and rock artists, including Jimi Hendrix, The Rolling Stones, Tom Waits, The Yardbirds, John Mayall, J. J. Cale, The Who (who made "Young Man Blues" a staple of their live performances and used it to open their original Live at Leeds album), and Georgie Fame, who described him, at a concert at the Rose Theatre Kingston on 24 May 2013 as "more important than Bob Dylan". Blue Cheer also recorded a version of his song "Parchman Farm" on their debut album, as well as the band Cactus, featuring Carmine Appice and Tim Bogert in the very early seventies. The Yardbirds and The Misunderstood both recorded versions of his song "I'm Not Talking".

His song "Look Here" was covered by The Clash on their album Sandinista!. Leon Russell covered Allison's song "Smashed!" on his album Stop All That Jazz. Van Morrison released an album of his songs entitled Tell Me Something: The Songs of Mose Allison, and Elvis Costello recorded "Everybody's Cryin' Mercy" on his album Kojak Variety and "Your Mind Is On Vacation" on King of America (Bonus Tracks). Dani Klein of Belgian music act Vaya Con Dios recorded Mind on Vacation on the album Roots and Wings.

Frank Black of the Pixies claims that the song "Allison" from the album Bossanova is about Mose Allison. He also states this at the beginning of the video for the song. His song "Monsters of the Id" was recorded by Stan Ridgway on his 2004 album Snakebite: Blacktop Ballads And Fugitive Songs.

The film The Whole Nine Yards begins with Mose Allison's song "I Don't Worry About A Thing" during the opening credits. Americana singer-songwriter Greg Brown wrote and performed the song "Mose Allison Played Here" on his 1997 album, Slant 6 Mind.

Allison was inducted into the Long Island Music Hall of Fame in 2006.

Allison has stated over the past few years that he would not be recording any new albums, but as of March 1, 2010, his website declared that his "new album, 'The Way of the World,' arrives March 23, 2010, marking his return to the recording studio after a 12-year absence."

In 2012, Mose Allison was honored with a blues marker on the Mississippi Blues Trail in his hometown of Tippo, Mississippi.

On January 14, 2013, Allison was honored as a Jazz Master by the National Endowment for the Arts at a ceremony at Lincoln Center in New York. The NEA Jazz Masters Fellowship is the nation's highest honor in jazz.