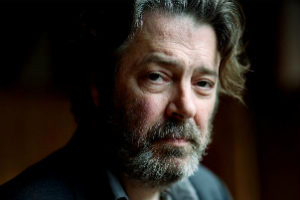 Roger Allam (born 26 October 1953) is an English actor, known primarily for his stage career, although he has performed in film, television and radio. He most famously played Inspector Javert in the original London production of the stage musical Les Misérables and Douglas Richardson in the award-winning radio series Cabin Pressure.

Allam was educated at Christ's Hospital and Manchester University. His father was vicar of St Mary Woolnoth.

He played Mercutio, in the Royal Shakespeare Company, in 1983. He has also appeared in many radio dramas for the BBC. In 2001, he starred in BBC Radio 4's adaptation of Les Misérables, as Valjean. In 2000 he played Hitler at the Royal National Theatre in David Edgar's Speer. He won an Olivier Award as Best Actor 2001, for his role as Captain Terri Denis in a revival of Privates on Parade, opening in December 2001 at the Donmar Warehouse, Covent Garden. In November 2002 at the Comedy Theatre he co-starred with Gillian Anderson in Michael Weller's romantic comedy What the Night Is For.

In 2003, he starred as former West German federal chancellor Willy Brandt in Michael Frayn's play Democracy which opened at the Cottesloe Theatre, in the Royal National Theatre. He stayed with the show for its transfer to the West End. In December 2004 and January 2005, Allam appeared as the villainous Abanazar in a pantomime of Aladdin at the Old Vic theatre, co-starring Ian McKellen, Maureen Lipman and Sam Kelly. He reprised this role at the Old Vic, once again with Ian McKellen and Frances Barber in 2006-07. In August 2005, Allam appeared in Blackbird by David Harrower alongside Jodhi May at the Edinburgh Festival in a production by German star director Peter Stein. The play got a transfer to the Albery Theatre in London in February 2006. Blackbird subsequently won a best new play award.

He also found time in 2006 to appear in Stephen Frears' The Queen, starring Oscar-winner Dame Helen Mirren, as the Queen's private secretary. In February 2007, he performed in the 1960s farce Boeing-Boeing at the Comedy Theatre in the West End, co-starring Mark Rylance, Frances de la Tour and Tamzin Outhwaite. In January 2007, he appeared for the first time as Peter Mannion MP in the special episode of the BBC comedy The Thick of It. He went on to reprise his role in the second special aired in July 2007 and in the extra 15 minute episode shown via the BBC red button. He has carried on with this role as a regular character in the subsequent series.

In 2008, Allam played the role of Max Reinhardt, the Salzburg Festival impresario in Michael Frayn's play Afterlife, the production staged by Michael Blakemore on the National Theatre's Lyttelton stage. In 2009, Allam played Albin/Zaza in La Cage aux Folles at the Playhouse in London. Allam played Falstaff in Henry IV, Part 1 and Henry IV, Part 2 at Shakespeare's Globe, in the 2010 season. He won the Olivier Award for Best Actor. In October 2010, Allam was reunitied with his former cast mates from Les Misérables in the 25th anniversary concert for a performance of "One Day More".

In April 2012 he starred as Uncle Vanya in the play by Anton Chekhov at the Chichester Festival Theatre. Since April 2013 he is starring as Prospero in William Shakespeare's "The Tempest" at Shakespeare's Globe theatre in London alongside Colin Morgan as "Ariel". Roger Allam presentend Michael Frayn at the 2013 "Olivier Awards" with an Special Lifetime Award which was aired by ITV1. Allam has also reteamed with Stephen Frears in Tamara Drewe, the film version of Posy Simmond's popular comic strip. He plays the crime novelist Nicholas Hardiment, who is bewitched by London journalist Tamara Drewe, played by Gemma Arterton. In the closing chapter of his Timebends autobiography (1987) Arthur Miller writes of Allam: "To play Adrian....in the 1986 Royal Shakespeare Company production of The Archbishop's Ceiling, Roger Allam gave up the leading role as Javert in the monster hit Les Misérables because he had done it over sixty times and thought my play more challenging for him at that moment of his career. Nor did he consider his decision a particularly courageous one. This is part of what a theatre culture means and it is something few New York actors would have the sense of security even to dream of doing."