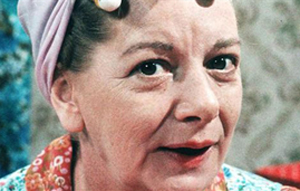 Jean Alexander (born 24 February 1926 in Toxteth, Liverpool, Lancashire, England) is an English television actress. She is best known to British television viewers as Hilda Ogden on the soap opera Coronation Street, a role she played from 1964 - 1987.

Although she always had aspirations to become an actress, she began her working life as a library assistant in Liverpool, but after five years the pull of the theatre became irresistible.

She began her acting career in 1949 at the Adelphi Guild Theatre in Macclesfield, and then toured in repertory companies in Oldham, Stockport and York. During this time she worked as an actress, wardrobe mistress and stage manager. Her television debut was in the hit television police series Z-Cars. She first appeared in Coronation Street in 1962 as landlady Mrs Webb.

Hilda Ogden
Two years later, she returned to Coronation Street and this time she played the unforgettable Hilda Ogden. She started playing the role in May 1964, finally retiring in December 1987.

Her dialect speech incorporating phrases such as \"nowt\" or \"eh, chuck\" resonated with the programme\'s viewers. On the 40 Years on Coronation Street special, she recounted an incident years ago: while she was shopping, a fan asked if she was Hilda. She responded in her normal accent, \"I beg your pardon?\" Taken aback, the fan said, \"Oh, don\'t you talk funny?\"

In 1984, hundreds of fans sent her condolence cards upon the death of her on-screen husband Stan, played by Bernard Youens, who had died shortly before his character was killed off. She was awarded the Royal Television Society Award in 1985 for her performance on Coronation Street. Laurence Olivier formed the Hilda Ogden Appreciation Society with prominent members. When she decided to leave the programme in 1987, fans started \"Save Hilda!\" campaigns; the lines of communication had been muddied as many did not realize that she had made her own decision to depart. Her final scenes in the programme were aired on 25 December 1987, attracting more than 20,000,000 viewers.

After Coronation Street
In 1988, she made a guest appearance on the BBC comedy series Last of the Summer Wine as Auntie Wainright, the local junk shop owner. Her appearance was so popular she returned for a second guest appearance in 1989. In 1991, she was made a regular on the series, a role she continues to play.

Alexander also earned a BAFTA nomination for Best Actress in a Television Series in 1988. She has also appeared on TV in The Phoenix and the Carpet, Barbara, Heartbeat and Where the Heart Is. Her movie credits include the films Scandal (1989) and Willie\'s War (1994).

Her autobiography is entitled The Other Side of the Street: The Autobiography of Jean Alexander.

In 2004, she starred with Kaye Wragg and Jamie Theakston in Drive, in the BBC drama series, The Afternoon Play. In 2005, the UK TV Times poll voted her as the \"Greatest Soap Opera Star of All Time.\"

Jean Alexander has never married and lives alone in Southport.