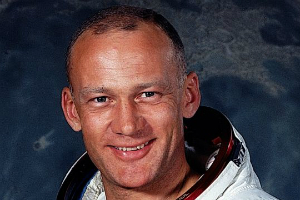 American astronaut, the second man to walk on the moon after Neil Armstrong on 7/20/1969. They landed the lunar module Eagle while Collins remained in orbit in the spacecraft Columbia, a historic first.

Aldrin graduated third in his class at the U.S. Military Academy at West Point, NY in 1951, earning his wings the following year. In 1959, he was a Korean War fighter pilot and Air Force major with eight years of service; he took an uncanny risk. Lacking any test pilot experience, he went to MIT for his doctorate in astronautics, specializing in the delicate science of spacecraft rendezvous. He dedicated his 1963 thesis on the subject, "To the men in the astronaut program. Oh, that I were one of them!"

Troubled by depression after his lunar excursion, he spent a year doing public relations work for NASA. Aldrin was too famous for a middling job and too inexperienced for one at the top. Then he returned to active duty in the air Force and was assigned as commandant of the services test-pilot school. In 10/1971 he was hospitalized for depression. In 1978, he faced up to another problem, alcoholism. He said he has not had a drink since then.

By 1987, Aldrin was a space technology consultant in Laguna Beach. He married in the fall to his third wife, Lois Cannon, with whom he scubas and skis. His kids, Mike, born in 1963, a flight attendant, and Andy, born in 1965, a Ph.D. at UCLA, are frequent visitors. A self-proclaimed futurist, he gives interviews and is prized on the lecture circuit.

He wrote two autobiographies, " Return To Earth" and "Men From Earth." In 8/1996, Aldrin published his first novel, an adventure drama written with sci-fi novelist John Barnes.