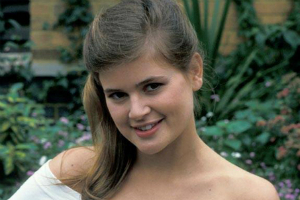 Sophie Aldred (born 20 August 1962) is an English actress and television presenter, best known for her portrayal of the Doctor's companion Ace in the television series Doctor Who during the late 1980s.

Aldred was born in Greenwich, London, but grew up in nearby Blackheath. She sang in the church choir of St James', Kidbrooke and attended Blackheath High School from 1973 until 1980, before enrolling as a drama student at University of Manchester. She graduated in 1983 and decided to embark on a career in children's theatre.

In 1987, she was cast as Ace in Doctor Who. Her tenure on the show spanned the last nine stories of the programme's original run, which ended in 1989.

Both before and since Doctor Who, Aldred has had a varied and busy television career, particularly in children's programming, where she has presented educational programmes such as Corners, Melvin and Maureen's Music-a-grams (which ran from 1992 to '96), Tiny and Crew (which she presented, 1995–99), the BBC series Words and Pictures (since 1993), and also CITV paranormal show It's a Mystery in 1996. She also played the character Minnie The Mini Magician from Series 8 onwards on CITV's ZZZap! between 1999 and 2001.

Aldred has presented and sung in several BBC Schools Radio series, including Singing Together, Music Workshop, Time and Tune and Music Box. She has also performed on radio and in the theatre. She has also reprised her role as Ace in the charity special Dimensions in Time and the Doctor Who audio plays produced by Big Finish Productions.

Throughout the 2000s she has worked extensively as a voice-over artist for television advertisements, and has also provided voices for animated series such as Bob the Builder, Sergeant Stripes and Dennis & Gnasher.

She co-wrote the hardback reference book, Ace, The Inside Story of the End of An Era with Mike Tucker, published by Virgin Publishing in 1996.

Aldred provided voices for the 2009 series Dennis and Gnasher, including that of title character Dennis the Menace.

As of 2012 she was providing the voice of Tom in Tree Fu Tom, a BBC children's series. The series' other main voice actor, David Tennant (who voices Twigs), previously played the Tenth incarnation of the Doctor in Doctor Who.

Sophie Aldred married actor Vince Henderson on 12 July 1997. They have two sons, Adam and William, who make occasional convention appearances with their mother.