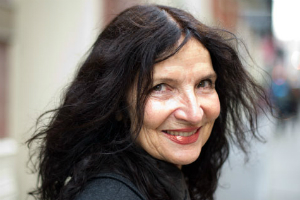 Lita Albuquerque is an American installation, environmental artist, painter and sculptor. She is on the core faculty of the Fine Art Graduate Program at Art Center College of Design.

She was born in Santa Monica, California and raised in Tunisia, North Africa and Paris, France. At the age of eleven she settled with her family in the U.S. She graduated with a BFA from University of California, Los Angeles, and studied at the Otis College of Art and Design, from 1971 to 1972.

In the 1970s, Albuquerque emerged on the California art scene as part of the Light and Space movement and won acclaim for her epic and poetic ephemeral pigment pieces created for desert sites. She gained national attention in the late 1970s with her ephemeral pigment installations pertaining to mapping, identity and the cosmos, executed in the natural landscape.

In 1980, Albuquerque garnered international acclaim for her pivotal installation, The Washington Monument Project, as featured in the International Sculptural Conference. The recognition this work gained, led to awards and commissions at major sites around the world, including the Great Pyramids, where she represented the United States at the International Cairo Biennale with her installation and exhibition Sol Star which won the prestigious Cairo Biennale Prize. In 2006 Albuquerque was awarded a National Science Foundation Grant and lead a team of artists and scientists on a journey to Antarctica where she created a large scale ephemeral artwork on the continent entitled Stellar Axis: Antarctica.

Albuquerque has created numerous site specific installations in the past two decades including works in the South Dakota Badlands, Death Valley and the Mojave desert. Her paintings are a materialization of the ideas about color, light and perception first created in her ephemeral works. Through her use of pure pigments, gold leaf and copper, she engages perceptual and alchemical shifts

Albuquerque, with architect Mitchell De Jarnett, installed Golden State, the largest public art commission in California State government history, a plaza design spanning two city blocks at the center of the Capitol Area East End Complex in Sacramento. Albuquerque completed Celestial Disk, a star map, sculpture and waterfall in collaboration with architect Robert Kramer, which provides the main entrance to the Cathedral of Our Lady of the Angels, Los Angeles. She worked with architect Cesar Pelli on a sculptural floor installation for the New Minneapolis Central Library, and with architect David Martin, has completed a glass pathway, star map and water wall disk for the Wallace Chapel at Chapman University in Orange, CA.

She is the recipient of numerous grants and awards including: A National Science Foundation Grant in the Artists and Writers Program; the Cairo Biennale Prize at the Sixth International Cairo Biennale; Arts International award for U.S. Artist Representative for the Cairo Biennale; National Endowment for the Arts Art in Public Places Award (1983, 1984, 1990), a National Endowment for the Arts Individual Fellowship Grant and the esteemed Civitella Ranieri Foundation Fellowship in the Visual Arts, Perugia, Italy (2002). In June 2004 she was honored by the Museum of Contemporary Art, Los Angeles for their 25th anniversary celebration for her contributions to the museum. Her work is featured in their anniversary catalogue and permanent collection.

Lita Albuquerque's work is also included in The Archives of American Art at the Smithsonian Institution and is collected by prominent Museums and Foundations, such as: The Whitney, The Museum of Contemporary Art, Los Angeles, J. Paul Getty Museum, The Frederick Weisman Foundation, LACMA, The Orange County Museum of Art, The Laguna Art Museum, The Palm Springs Desert Museum, as well as numerous embassies and corporations.