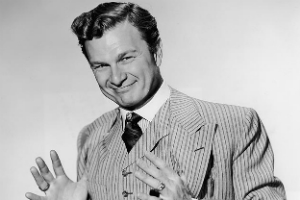 Edward Albert Heimberger (April 22, 1906 – May 26, 2005), known professionally as Eddie Albert, was an American actor and activist. He was nominated for the Academy Award for Best Supporting Actor in 1954 for his performance in Roman Holiday, and in 1973 for The Heartbreak Kid.

Other well-known screen roles of his include Bing Edwards in the Brother Rat films, traveling salesman Ali Hakim in the musical Oklahoma!, and the corrupt prison warden in 1974's The Longest Yard. He starred as Oliver Wendell Douglas in the 1960s television situation comedy Green Acres and as Frank MacBride in the 1970s crime drama Switch. He also had a recurring role as Carlton Travis on Falcon Crest, opposite Jane Wyman.

Edward Albert Heimberger was born in Rock Island, Illinois, on April 22, 1906, the oldest of the five children of Frank Daniel Heimberger (1874–1970), a realtor, and his wife Julia (née Jones). His year of birth is often given as 1908, but this is incorrect. His parents were unmarried when Albert was born and his mother altered his birth certificate after her marriage.

When he was one year old, his family moved to Minneapolis, Minnesota. Young Edward secured his first job as a newspaper boy when he was only six. During World War I, his German name led to taunts as "the enemy" by his classmates. He studied at Central High School in Minneapolis and joined the drama club. His schoolmate Harriette Lake (later known as actress Ann Sothern) was a few years his junior. Finishing high school in 1924, he entered the University of Minnesota, where he majored in business.

When he graduated, he embarked on a business career. However, the stock market crash in 1929 left him substantially unemployed. He then took odd jobs, working as a trapeze performer, an insurance salesman, and a nightclub singer. Albert stopped using his last name professionally, since it invariably was mispronounced as Hamburger. He moved to New York City in 1933, where he co-hosted a radio show, The Honeymooners - Grace and Eddie Show, which ran for three years. At the show's end, he was offered a film contract by Warner Bros.

In the 1930s, Albert performed in Broadway stage productions, including Brother Rat, which opened in 1936. He had lead roles in Room Service (1937–1938) and The Boys from Syracuse (1938–1939). In 1936, Albert had also become one of the earliest television actors, performing live in RCA's first television broadcast, a promotion for their New York City radio stations.

In 1938, he made his feature film debut in the Hollywood version of Brother Rat with Ronald Reagan and Jane Wyman, reprising his Broadway role as cadet "Bing" Edwards. The next year, he starred in On Your Toes, adapted for the screen from the Broadway smash by Rodgers and Hart.

Prior to World War II, and before his film career, Albert had toured Mexico as a clown and high-wire artist with the Escalante Brothers Circus, but secretly worked for U.S. Army intelligence, photographing German U-boats in Mexican harbors. On September 9, 1942, Albert enlisted in the United States Navy and was discharged in 1943 to accept an appointment as a lieutenant in the U.S. Naval Reserve. He was awarded the Bronze Star with Combat "V" for his actions during the invasion of Tarawa in November 1943, when, as the pilot of a U.S. Coast Guard landing craft, he rescued 47 Marines who were stranded offshore (and supervised the rescue of 30 others), while under heavy enemy machine-gun fire.

From 1948 on, Albert guest-starred in nearly ninety television series. He made his guest-starring debut on an episode of The Ford Theatre Hour. This part led to other roles such as Chevrolet Tele-Theatre, Suspense, Lights Out, Schlitz Playhouse of Stars, Studio One, Philco Television Playhouse, Your Show of Shows, Front Row Center, The Alcoa Hour, and in dramatic series, The Eleventh Hour, The Reporter, and General Electric Theater.

In 1959, Albert was cast as businessman Dan Simpson in the episode "The Unwilling" of the NBC western series, Riverboat. In the story line, Dan Simpson attempts to open a general store in the American West despite a raid from pirates on the Mississippi River who stole from him $20,000 in merchandise. Debra Paget is cast in this episode as Lela Russell; Russell Johnson, as Darius, and John M. Picard is uncredited as a river pirate.

The 1950s also saw a return to Broadway for Albert, including roles in Miss Liberty (1949–1950) and The Seven Year Itch (1952–1955). In 1960, Albert replaced Robert Preston in the lead role of Professor Harold Hill, in the Broadway production of The Music Man. Albert also performed in regional theater. He created the title role of Marc Blitzstein's Reuben, Reuben in 1955 in Boston. He performed at The Muny Theater in St. Louis, reprising the Harold Hill role in The Music Man in 1966 and playing Alfred P. Doolittle in My Fair Lady in 1968.

In the 1950s, Albert appeared in film roles such as that of Lucille Ball's fiancé in The Fuller Brush Girl (1950), as Bill Gorton in The Sun Also Rises (1957) and as a traveling salesman in Carrie (1952). He was nominated for his first Oscar as Best Supporting Actor with Roman Holiday (1953). In Oklahoma! (1955), he played a womanizing Persian peddler, and in Who's Got the Action? (1962), he portrayed a lawyer helping his partner (Dean Martin) cope with a gambling addiction. In Teahouse of the August Moon (1956) he played a psychiatrist with an enthusiasm for farming. He appeared in several military roles, including The Longest Day (1962), about the Normandy Invasion. The film Attack! (1956) provided Albert with a dark role as a cowardly, psychotic Army captain whose behavior threatens the safety of his company. In a similar vein he played a psychotic United States Army Air Force colonel in Captain Newman, M.D. (1963), opposite Gregory Peck.

Albert's first television series was Leave It to Larry, a CBS sitcom that aired in the 1952-1953 season, with Albert as Larry Tucker, a shoe salesman who lives with his young family in the home of his father-in-law and employer, played by Ed Begley. He guest starred on various series, including ABC's The Pat Boone Chevy Showroom as well as the Westinghouse Studio One series (CBS, 1953–54), playing Winston Smith in the first TV adaptation of 1984, by William Templeton.

In 1964, Albert guest starred in Cry of Silence, an episode of the science fiction television series The Outer Limits. Albert played Andy Thorne who, along with his wife Karen (played by June Havoc), had decided to leave the city and buy a farm (a recurring role in Albert's career). They find themselves lost and in the middle of a deserted valley where they come under attack by a series of tumbleweeds, frogs, and rocks.

Albert was cast as Charlie O'Rourke in the 1964 episode "Visions of Sugar Plums" of the NBC education drama series, Mr. Novak, starring James Franciscus. Bobby Diamond, formerly of the Fury series also appeared in this episode.

In 1965, Albert was approached by producer Paul Henning to star in a new sitcom for CBS called Green Acres. His character, Oliver Wendell Douglas, was a lawyer who left the city to enjoy a simple life as a farmer. Co-starring on the show was Eva Gabor as his urbanite, spoiled wife. The show was an immediate hit, achieving fifth place in the ratings in its first season. By 1971, Green Acres was still reasonably popular but was canceled when CBS decided to discontinue their lineup of rural-themed programs due to changing tastes and because they were sensitive to the fact that they had been disparagingly referred to in the press as the "Country Broadcasting System".

After a four-year-absence from the small screen, and upon reaching age 69 in 1975, Albert signed a new contract with Universal Television, and starred in the popular 1970s adventure/crime drama Switch for CBS, as a retired police officer, Frank McBride, who goes to work as a private detective with a former criminal he had once jailed. In its first season, Switch was a hit. By late 1976, the show had become a more serious and traditional crime drama. At the end of its third season in 1978, ratings began to drop, and the show was canceled after 70 episodes.

In 1965, the year that Green Acres premiered, Albert served as host / narrator for the telecast of a German-American made-for-television film version of The Nutcracker, which was rerun several times and is now available as a Warners Archive DVD. The host sequences and the narration, all included on the DVD, were especially filmed for English-language telecasts of this short film (it was only an hour in length, and cut much from the Tchaikovsky ballet).

In 1968, he voiced Myles Standish in the Rankin/Bass Animated TV special "The Mouse on the Mayflower".

In 1972, Albert resumed his film career and was nominated for an Oscar for Best Supporting Actor for his performance as an overprotective father, in The Heartbreak Kid (1972) and delivered a memorable performance as an evil prison warden in 1974's The Longest Yard. In a lighter vein, Albert portrayed the gruff though soft-hearted Jason O'Day in the successful Disney film Escape to Witch Mountain in 1975.

In the mid-1980s, Albert was reunited with longtime friend and co-star of the Brother Rat and An Angel from Texas films Jane Wyman in a recurring role as the villainous Carlton Travis in the popular 1980s soap opera Falcon Crest. He also guest-starred on an episode of the '80s television series Highway to Heaven, as well as Murder She Wrote and Columbo: Dead Weight, and in 1990 he reunited with Eva Gabor for a Return To Green Acres. In 1993, he guest-starred for several episodes on the ABC daytime soap opera General Hospital as Jack Boland, and also made a guest appearance on the Golden Girls spin-off, The Golden Palace the same year.

Albert was active in social and environmental causes especially from 1970s onward. Beginning in the 1940s, his Eddie Albert Productions produced films for various US corporations, as well as documentaries such as Human Beginnings (a for-its-time controversial sex education film) and Human Growth. He narrated and starred in a 1970 film promoting views of the Weyerhaeuser Company, a major international forestry products concern.

He was special envoy for Meals for Millions and consultant for the World Hunger Conference. He joined Albert Schweitzer in a documentary about African malnutrition and fought agricultural and industrial pollution, particularly DDT. Albert promoted organic gardening, and founded City Children's Farms for inner city children, while supporting eco-farming and tree planting.

Albert was national chairman for the Boy Scouts of America's conservation program and founded the Eddie Albert World Trees Foundation. He was a trustee of the National Recreation and Park Association and a member of the U.S. Department of Energy's advisory board. TV Guide called him "an ecological Paul Revere".

Albert was also a director of the U.S. Council on Refugees and participated in the creation of Earth Day and spoke at its inaugural ceremony in 1970.

The Alberts lived in Pacific Palisades, California, in a Spanish-style house on an acre of land (4,000 square meters) with a cornfield in front. Albert grew organic vegetables in a greenhouse and recalled how his parents had a "liberty garden" at home during World War I.

Albert suffered from Alzheimer's disease in his last years. His son put his acting career aside to care for his father. Despite his illness, Albert exercised regularly until shortly before his death. Eddie Albert died of pneumonia in 2005 at the age of 99 at his home in Pacific Palisades. He was interred at Westwood Village Memorial Park Cemetery in Los Angeles, California, next to his wife Margo and his Green Acres co-star Eva Gabor.

Albert's son, Edward Jr. (1951–2006) was an actor, musician, singer, and linguist/dialectician. He died at age 55, one year after his father. He had been suffering from lung cancer for 18 months.

For contributions to the television industry, Eddie Albert was honored with a star on the Hollywood Walk of Fame at 6441 Hollywood Boulevard.