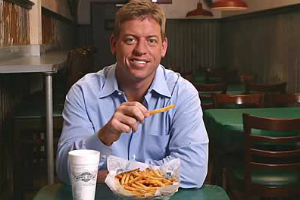 American football star with the Dallas Cowboys, rising to the top of the NFL in the '90s. He created an unstoppable offense along with Emmitt Smith and Michael Irvin. They put the Cowboys into high gear with back-to-back Super Bowl victories. Star quarterback, second best passer, offensive leader. 6'4", 220lb.

Aikman became engaged to Cowboy's public relations office worker, Rhonda Worthey, in October of 1999. She has a school-age daughter. In a very private ceremony, 4/08/2000, at his Plano, TX home, Aikman exchanged vows with Worthey. They became parents to a girl, Jordan Ashley, on 8/24/2001. Their second daughter Alexa Marie was born less than a year later, in 2002.