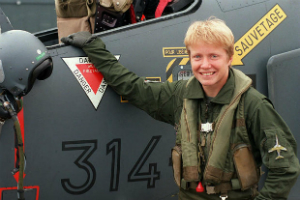 French commander (major) and aviatrix who achieved a historical first when, at the age of 25, she became the first woman fighter pilot in the French Air Force. Her promising military career was cut short by death from cancer seven years later.

Upon receiving her degrees, Caroline Aigle chose to make her career in the French Air Force. Almost from the start, she provided illustration of her top competitive skills as a sportswoman by becoming the 1997 French military champion in triathlon, followed by the 1997 triathlon world championship in military team competition. Still competing in 1999, she and her team won the triathlon world military vice-championship. She was also a top skydiver and free-fall parachutist. On 28 May 1999, she became the first woman to receive the Air Force's coveted fighter pilot wings. Among the top candidates, she was also on the verge of being selected as an astronaut for the European Space Agency.

Caroline Aigle was married to Christophe "Douky" Deketelaere, a pilot and deputy leader of the Breitling Jet Team. She was pregnant with Gabriel (2nd son) when the malignancy was first discovered, and refused to undergo an abortion despite the increased difficulty in cancer treatment options. Gabriel was delivered by caesarean section, five-and-a half months into term, fifteen days before her death.

As a side note: it's striking that her nickname was: Moineau, which means sparrow, given to her because she was 'petite' although her real name 'aigle' literally means 'eagle' a name that suits her wonderful with a Jupiter in Pisces at the MC.