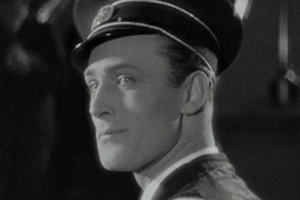 He was born William Brian de Lacy Aherne in King's Norton, Worcestershire, the son of the Birmingham architect William de Lacy Aherne by his spouse Louise née Thomas. Educated at Edgbaston, Birmingham, he had also carried out some early stage training at Italia Conti Academy in London and had some child roles before completing his education at Malvern College. He first appeared on the stage in Birmingham with the Pilgrim Players (which subsequently developed into the Birmingham Repertory Theatre), on 5 April 1910, in Fifinella; and made his first appearance on the London stage at the Garrick Theatre, 26 December 1913, in Where the Rainbow Ends, a fairy play by Clifford Mills and John Ramsey, with music by Roger Quilter, which ran at various theatres for over 25 years.

He then studied with a view to becoming an architect, but, having had considerable amateur experience in Birmingham, and with Liverpool's Green Room Club, he obtained an engagement under Robert Courtneidge, and appeared at London's Savoy Theatre, opening on 26 December 1923, as Jack O'Hara in a revival of Paddy the Next Best Thing, the play by W. Gayer-Mackay and Robert Ord (from the novel). He then toured with Violet Vanbrugh as Hugo in The Flame, and appeared at the London Playhouse in May 1924 as Langford in Leon Gordon's White Cargo, in which he played all through 1924-25. In 1926 he accompanied Dion Boucicault, Jr. to Australia, where he appeared in several plays by J.M. Barrie: as Valentine Brown in the comedy Quality Street, John Shand in the comedy What Every Woman Knows, Crichton in The Admirable Crichton, Simon and Harry in Mary Rose; and Willocks in Aren't We All? another comedy by Frederick Lonsdale.

Aherne reappeared in London at the Strand in March 1927 again as Langford in White Cargo and continued on the London stage in a succession of plays until late 1930 when he went to America, making his first appearance on the New York stage at the Empire Theatre in New York on 9 February 1931, playing Robert Browning in Rudolph Besier's play The Barretts of Wimpole Street opposite Katharine Cornell. Miss Cornell and Aherne remained lifelong friends and he played in many of her subsequent productions. He was back in London in 1934 but returned that year to New York, where he appeared in December at the Martin Beck Theatre as Mercutio in Romeo and Juliet, with Katharine Cornell. He continued his stage appearances during his film career, which he commenced in 1924 in silent film.

Aherne made his talkie debut in Madame Guillotine (1931). After a few more British talkies he moved on to lead roles in Hollywood, where he made over thirty films, including I Live My Life (1935), the multi-Oscar nominated brilliant ditzy comedy Merrily We Live (1938), Oscar-nominated for his role as Emperor Maxmilian in Juarez (1939), Vigil in the Night (1940), his best film, the 1948 psychological film noir, The Locket, Titanic (1953), and The Best of Everything (1959). In 1945, he played sleuth Simon Templar in the radio mystery series, The Saint.

Aherne also appeared in many TV theatrical series, including General Electric Theater, The Twilight Zone, in the episode "The Trouble with Templeton", and Rawhide. He also appeared as guest host on the TV panel show The Name's the Same.

Aherne published his autobiography A Proper Job in 1969, as well as A Dreadful Man (1979), a biography of his friend George Sanders.

Between 1939 and 1945, Aherne was married to actress Joan Fontaine, which ended in divorce. He then married Eleanor de Liagre Labrot. He was the brother of actor Patrick Aherne.

Aherne died of heart failure in Venice, Florida, USA at the age of 83. Brian Aherne was honoured with a star on the Hollywood Walk of Fame at 1772 Vine Street.