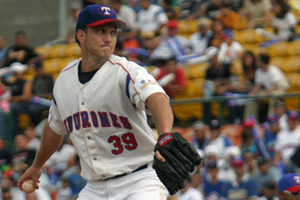 American baseball player, a right-handed pitcher who played two games with the Detroit Tigers in June 1995. He was drafted by the team on 1 June 1992. In 2007, he played with the Macoto Cobras in the Chinese league.

Ahearne, 6’ 3", 195 lbs. bats right and throws right. He played for one season on one team. Pitchers are rated on their "earned run average" and Pat went from a respectable 3.3 ERA to an almost-unheard-of 0.87 in just one year when he was voted both "Most Valued Player" and "Baseball League Pitcher of the Year."

He credits his spectacular skill increase to EFT, Emotional Freedom Techniques (trademarked), developed by Stanford Engineer Gary Craig as a major refinement of the Callahan Techniques. Sports pro’s find their performance level increased remarkably with the application of EFT, and Ahearne is one who is on the bandwagon touting its praises.

He was introduced to the techniques by Steve Wells, a psychologist based in Perth, Australia. Prior to that time, he was doing well but not to what he felt was his capacity. The results of his training were astounding as shown clearly by comparing his 1998 and 1999 Australian Baseball League season statistics before and after EFT.

In 1999 he wrote a testimonial to the edge that took him toward award-winning games. When he left Australia at the end of their season, Ahearne secured a position in the Atlantic League playing for Bridgeport, where he played six games before being signed by the Seattle Mariners. With a relaxed approach to his game, he was not flustered by knowing that a scout was watching his game, a "cool" that he attributed to EFT.