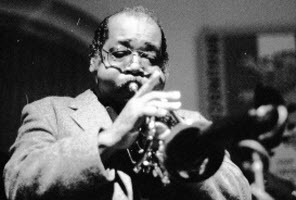 Nathaniel Adderley (November 25, 1931 – January 2, 2000) was an American jazz cornet and trumpet player who played in the hard bop and soul jazz genres. He was the brother of saxophonist Julian "Cannonball" Adderley.

Adderley was born in Tampa, Florida, but moved to Tallahassee, Florida, when both parents were hired to teach at Florida A&M University. He and Cannonball played with Ray Charles in the early 1940s in Tallahassee. In the 1950s Nat Adderley worked with his brother's original group, with Lionel Hampton, and with J. J. Johnson, then in 1959 joined his brother's new quintet and stayed with it until Cannonball's death in 1975. He composed "Work Song," "Jive Samba," and "The Old Country" for this group.

After his brother's death he led his own groups and recorded extensively. During this period he worked with, among others, Ron Carter, Sonny Fortune, Johnny Griffin, Antonio Hart, and Vincent Herring.

He also helped in the founding and development of the annual Child of the Sun Jazz Festival, held annually at Florida Southern College in Lakeland, Florida.

Adderley lived on 112th Street in Harlem in the 1960s and in Teaneck, New Jersey, in the 1970s, before moving to Lakeland, Florida. He had also lived near his brother in Corona, Queens.

Upon his death as a result of complications from diabetes, aged 68, in Lakeland, Florida, in January 2000, Adderley was interred near his brother in the Southside Cemetery in Tallahassee, Florida. His son, Nat Adderley, Jr. a keyboardist, was Luther Vandross's long-time musical director.