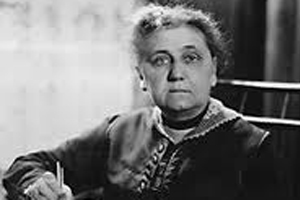 American social worker and feminist. She devoted her life to social welfare and the rights of women and children. Fighting hard for reform legislation, her work with immigrant families at Hull House, which stressed personal responsibility and civic engagement, was inimical to the welfare-state mentality that came to dominate American liberalism.

The eighth of nine kids born to a prosperous miller, she had her roots in the Quaker faith. When she was two, her mom died in childbirth, and seven when her dad remarried. Her education was completed at a seminary college to prepare her for missionary work, graduating in 1882.

She sidestepped pressure to marry by having several year's illnesses as well as extending her tour of Europe to two years study and travel, 1883-1885. Determined to dodge her family's plans for her marriage, she returned to Europe in 1887.

She returned In 1889 with a goal in mind, founding Hull House, a settlement house for immigrants with programs that ranged from day nurseries to college courses. By the early 20th century she was publishing one best-selling book after another, based on her speeches and lectures presented to diverse audiences, all of them eloquent, moving, didactic and superbly written. She was the first woman president of the National Conference of Social Welfare, 1909, President of Women's International League for Peace and Freedom 1915-29 and the second woman in history to win the Nobel Peace Prize, 1931.