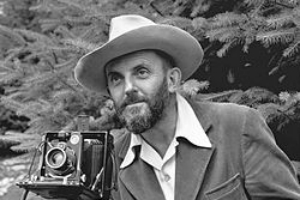 American photographic artist, the most significant figure in photography in the 20th century and one of the finest technicians in the history of photography, known since 1930. As a dedicated conservationist his interpretation of natural scenes are breathtaking for their grandeur and beauty.

He was sent to Yosemite Valley to recover after nearly dying from influenza during the pandemic of 1918-19, and it was there where nature became his muse and religion. That spiritual sensibility suffused the sublime landscapes he photographed in the 1930s and '40s. He returned to the Sierra Nevada mountains each summer till the end of his life, with Yosemite his temple.

Photography was a hobby as he studied music in his 20s until he realized his true calling about 1930. He had already published a portfolio of studies in 1927. For a living, he taught and lectured, worked in advertising and wrote tech articles. In 1937 he moved to the Yosemite Valley from where he traveled on work assignments. In 1941 he loaded his car with photographic equipment and began a national journey, commissioned by the U.S. Department of the Interior to photograph national parks at a salary of $22.22 a day. A romantic working in a realist's medium, he was the author of a series of Basic Photo Books from 1948 and held important art shows.

He met Virginia Best, soft spoken and good natured, in 1921 in Yosemite. Married 1/02/28, Adams had a son and a daughter, Michael Adams, a physician and Anne Adams. His family never took the place of his work and some biographers write that his glaring neglect of them led to a deep emotional estrangement with his children.

Adams lived in Carmel since 1962. In his later years his fingers were twisted and stiffened from arthritis, and he seldom played the piano that was once his love. In spite of heart bypass and valve replacement surgery, with a pacemaker added in 1983, he seemed incapable of understanding the concept of slowing down.

When he died 4/22/84, Monterey, CA, of heart failure and cancer, he left an archive of 40,000 negatives that editors will be working through for decades and a heritage of beauty and reverence that has enriched all whom he touched.