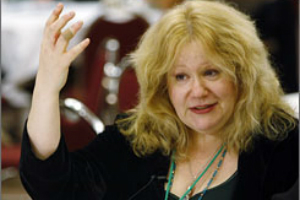 Shelley Ackerman (born October 14, 1953 in Manhattan), is an American astrologer, writer, actress and singer. An avid and accomplished researcher, she specializes in creative, cultural, humanistic, and political astrology and is a frequent guest and commentator on radio and television news and entertainment shows.

The daughter of a rabbi, Ackerman grew up in New York City and attended the East Side Hebrew Institute on the Lower East Side of Manhattan and graduated with honors from the High School of Music and Art at age 16 in 1970.

She began her career at age 17 as a comedic singer (and waitress) at The Improvisation and at age 19 at Catch a Rising Star in New York.

She worked at both through the early 1980s, and at the same time performed in NY's major cabaret rooms including: The NY Playboy Club, The Continental Baths, Reno Sweeney's (where she was the opening act for Reverend Al Carmines in 1974 and Peter Allen in 1975), Les Mouches, The Grand Finale, Freddy's Supper Club, Ted Hook's OnStage, and Lox Around the Clock.

She studied under Stella Adler in the early 1980s, and appeared at the 92nd Street Y in New York in the prestigious Lyrics and Lyricists program in 1985, directed by Maurice Levine. It was there that she caught the eye (and ear) of Elly Stone, who remembered her voice in 1987 when she and her husband Eric Blau (who translated Brel's Flemish lyrics into English) were casting for their upcoming 20th anniversary production of Jacques Brel is Alive and Well and Living in Paris. She starred in the 1988 production of that show with Karen Akers at Town Hall in New York and at the Kennedy Center in Washington, D.C. She has also played several minor movie roles, including the films Taking Off (1971), Garbo Talks (1984), The Flamingo Kid (1984), The Purple Rose of Cairo (1985), and Crossing Delancey (1988), and on the television shows Kate & Allie and The Guiding Light.

In 1990, she won the Backstage Bistro Award for Best Vocalist in New York City.

Born with a knack for remembering the birthdate of nearly everyone she has ever met, (which later developed as a photographic memory of the details in every astrological chart she has ever seen), Ackerman’s interest in astrology began in her early teens.

In 1974 she and her then-boyfriend, comic/actor Richard Belzer, obtained their first computerized astrological charts from Astroflash, a small booth set up in Grand Central Terminal in New York City that offered the earliest computer-generated horoscopes. Her interest grew through the 1970s and as an amateur astrologer she collected data (birth dates, times, and places) of her fellow performers between shows at both The Improv and Catch a Rising Star. Her first position as an astrologer was at Gurney's Inn in Montauk, New York on July 4 weekend 1992, and she made her first major contribution to the astrological community later that summer by obtaining Bill Clinton's birthtime from his mother Virginia Kelley.

In 1996 she became the head of the New York affiliate of the American Federation of Astrologers. She is also active in the New York chapter of the National Council for Geocosmic Research, and has taught at the New York Theosophical Society 1996-2006. She lectures, teaches, and sees clients across the USA, Europe, and Canada, and has written extensively for Beliefnet. Since August 2006, Ackerman's weekly column and commentary appears in The Westchester Guardian.