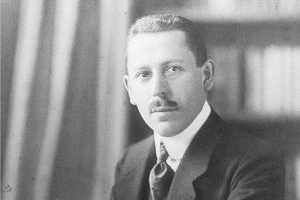 Karl Abraham (3 May 1877 – 25 December 1925) was an early important and influential German psychoanalyst, and a collaborator of Sigmund Freud, who called him his 'best pupil'.

He was born in Bremen, Germany. His parents were Nathan Abraham, a Jewish religion teacher (1842 – 1915) and his wife (and cousin) Ida (1847 – 1929). His studies in medicine enabled him to take a position at the Burghölzli Swiss Mental Hospital, where Eugen Bleuler practiced. The setting of this hospital initially introduced him to the psychoanalysis of Carl Gustav Jung.

In 1907, he had his first contact with Sigmund Freud, with whom he developed a lifetime relationship. Returning to Germany, he founded the Berliner Society of Psychoanalysis in 1910. He was the president of the International Psychoanalytical Association from 1914 to 1918 and again in 1925.

In the oral stage of development, the first relationships children have with objects (caretakers) determine their subsequent relationship to reality. Oral satisfaction can result in self-assurance and optimism, whereas oral fixation can lead to pessimism and depression. Moreover, a person with an oral fixation will present a disinclination to take care of him/herself and will require others to look after him/her This may be expressed through extreme passivity (corresponding to the oral benign suckling substage) or through a highly active oral-sadistic behaviour (corresponding to the later sadistic biting substage) (1924a).

In addition, Abraham based his understanding of manic-depressive illness on the study of the painter Segantini: an actual event of loss is not itself sufficient to bring the psychological disturbance involved in melancholic depression. This disturbance is linked with disappointing incidents of early childhood; in the case of men always with the mother (Abraham, 1911). This concept of the prooedipal “bad” mother was a new development in contrast to Freud’s oedipal mother and paved the way for the theories of Melanie Klein (May-Tolzmann, 1997).

Another important contribution is his work “A short study of the Development of the Libido” (1924b), where he elaborated on Freud’s “Mourning and Melancholia” (1917) and demonstrated the vicissitudes of normal and pathological object relations and reactions to object loss. Moreover, Abraham investigated child sexual trauma and, like Freud, proposed that sexual abuse was common among psychotic and neurotic patients. Furthermore, he argued (1907) that dementia praecox is associated with child sexual trauma, based on the relationship between hysteria and child sexual trauma demonstrated by Freud.

Abraham (1920) also showed interest in cultural issues. He analyzed various myths suggesting their relation to dreams (1909) and wrote an interpretation of the spiritual activities of the Egyptian monotheistic Pharaoh Amenhotep IV (1912).

Abraham died prematurely on December 25, 1925, from complications of a lung infection and may have suffered from lung cancer.