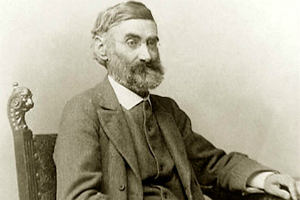 Ernst Karl Abbe (January 23, 1840 – January 14, 1905) was a German physicist, optometrist, entrepreneur, and social reformer. Together with Otto Schott and Carl Zeiss, he laid the foundation of modern optics. Abbe developed numerous optical instruments. He was a co-owner of Carl Zeiss AG, a German manufacturer of research microscopes, astronomical telescopes, planetariums and other optical systems.

Abbe was born January 23, 1840 in Eisenach, Saxe-Weimar-Eisenach. He came from a humble home — his father was a foreman in a spinnery. Supported by his father's employer, Abbe was able to attend secondary school and to obtain the general qualification for university entrance with fairly good grades. By the time he left school, his scientific talent and his strong will had already become obvious. Thus, in spite of the family's strained financial situation, his father decided to support Abbe's studies at the Universities of Jena (1857–1859) and Göttingen (1859–1861). During his time as a student, Abbe gave private lessons to improve his income. His father's employer continued to fund him. Abbe was awarded his PhD in Göttingen on March 23, 1861. This was followed by two short assignments at the Göttingen observatory and at Physikalischer Verein in Frankfurt (an association of citizens interested in physics and chemistry that was founded by Johann Wolfgang von Goethe in 1824 and still exists today). On August 8, 1863 he qualified as a university lecturer at the University of Jena. In 1870, he accepted a contract as an extraordinary professor of physics and mathematics in Jena. In 1871, he married Else Snell, daughter of the mathematician and physicist Karl Snell, one of Abbe's teachers. He became director of the Jena astronomical and meteorological observatories in 1878. In 1889, he became a member of the Bavarian Academy of Sciences and Humanities. He also was a member of the Saxon Academy of Sciences. He was relieved of his teaching duties at the University of Jena in 1891. Abbe died January 14, 1905 in Jena.

In 1866, he became a research director at the Zeiss Optical Works, and in 1868 he invented the apochromatic lens, a microscope lens which eliminates both the primary and secondary color distortion. He designed the first refractometer, which he described in a booklet published in 1874. He created the Abbe number, a measure of any transparent material's variation of refractive index with wavelength and Abbe's criterion, which tests the hypothesis, that a systematic trend exists in a set of observations (in terms of resolving power this criterion stipulates that an angular separation cannot be less than the ratio of the wavelength to the aperture diameter, see angular resolution). Already a professor in Jena, he was hired by Carl Zeiss to improve the manufacturing process of optical instruments, which back then was largely based on trial and error.

Abbe was the first to define the term Numerical Aperture, as the sine of the half angle multiplied by the refractive index of the medium filling the space between the cover glass and front lens.

Abbe is credited by many for discovering the resolution limit of the microscope, and the formula (published in 1873)

Although in another early appearance of this formula in a publication in 1874 by Helmholtz, Helmholtz states this formula was first derived by Joseph Louis Lagrange, who had died 61 years prior. Abbe was in the camp of the wide aperturists, arguing that microscopic resolution is ultimately limited the aperture of the optics, but also argued that depending on application there are other parameters that should be weighted over the aperture in the design of objectives. In Abbe's 1874 paper, titled "A Contribution to the Theory of the Microscope and the nature of Microscopic Vision", Abbe states that the resolution of a microscope is inversely dependent on its aperture, but without proposing a formula for the resolution limit of a microscope.

Although the first theoretical derivations of Eq. 1 were published by others, it is fair to say that Abbe was the first to reach this conclusion experimentally. The objectives that the Abbe Zeiss collaboration were producing were of ideal ray geometry, allowing Abbe to find that the aperture sets the upper limit of microscopic resolution, not the curvature and placement of the lenses. Abbe's first publication of Eq. 1 occurred in 1882. In this publication Abbe states, that both his theoretical and experimental investigations confirmed Eq. 1. Abbe's contemporary H. E. Fripp, English translator of Abbe's and Helmholtz's papers, puts their contributions on equal footing.

In order to produce high quality objectives, Abbe made significant contributions to the diagnosis and correction of Optical aberrations, which is required for an objective to reach the resolution limit of Eq. 1. In addition to spherical aberration, Abbe discovered that the rays in optical systems must have constant angular magnification over their angular distribution to produce a diffraction limited spot, a principle known as the Abbe sine condition.

Abbe invented the Abbe condenser, used for microscope illumination. During his association with Carl Zeiss' microscope works, he also introduced the eight-hour workday, in remembrance of the 14-hour workday of his own father. In 1891, Ernst set up and endowed the Carl Zeiss Foundation for research in science. In 1896, he reorganized the Zeiss optical woks into a cooperative with profit-sharing.

The crater Abbe on the Moon was named in his honour.